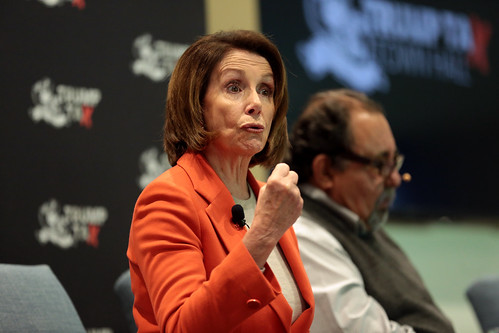 Two things happened within the space of 24 hours that tell much about why expectant House Speaker California Democrat Nancy Pelosi must go. The first were her words. Even before the final 2018 mid-term election results were in confirming the Democrat's retake of the House, Pelosi was offering soothing salve to the GOP. She promised a return to bi-partisan deals with the it.

The other was the words of Trump. He wasted no time in hailing Pelosi, "I really respected what Nancy said last night." The "what" being her tout of bi-partisanship. And why wouldn't Trump love it and her for promising that. She's offering the Olive Branch that is totally alien to Trump and the GOP. They understand what Pelosi still doesn't get. The GOP's two decade take no prisoners, brutal war against any and every Democrat and Democratic party initiative in Congress has resulted in a GOP lock on the majority of the nation's statehouses, governorships, and near total domination of Congress. That's topped by the grand prize, the White House. Despite Trump's momentary sweet talk about her, it's a safe bet that he'll be name calling her and slandering her the first chance he gets.

Pelosi's poll rating consistently wallows in bottom single digits. It is worse than Trumps. Trump knows it. He shamelessly demonized her every stop he made during a campaign swing in August, shouting out to his trained seal flock that if you vote for a Democratic opponent of any GOP congressional candidate you're voting for Pelosi. His "Do you want Pelosi" pitch usually worked, and the GOP candidate won.

The hammer Pelosi ploy work for good reasons. She's been in the House seemingly forever. She's an unabashed, old line-traditional, California liberal. She has been on the top Democratic watch during an almost unprecedented losing cycle of Democratic incumbents and candidates in too many districts to count. The losses haven't just been for congressional seats. They've been state and local offices that. This makes her the perfect political punching bag. The 2018 mid-term results didn't change that. The Democrats took back the House not because of anything Pelosi did. They recaptured it because there was just enough dissatisfaction with Trump's racist, misogynist, slur and slander, hate talk, the changing gender, ethnic, and age demographics in suburban districts, a spirited and focused GOTV drive by African-American and Hispanic interest groups, and a huge push within the party of younger, progressive Democrats.

Pelosi defenders within and without the party cling to her for two reasons. One, she is a prolific fund raiser. The other is that she calls the shots among House Democrats. That means she can dole out who gets the plum committee posts and chairs. This buys a lot of loyalty from Democrats who may have qualms about her leadership and effectiveness.

However, these supposed Pelosi value points are a big part of the problem. Money alone doesn't win elections anymore. The willingness of candidates to pose fresh ideas, frontally challenge the GOP and Trump, and fight an uncompromising battle for health care, the minimum wage, civil rights, and labor protections, and against racial and gender bigotry, are proving to be winning formulas for the new flock of Democrats. If Pelosi plays boss in the House by dishing out to her loyalist's juicy assignments and punishing those Democrats who don't go along with her program, then this stifles the very fighting spirit that's needed to battle the worst excesses of Trump and Trumpism. Trump has given Democrats no wiggle wrong to make nice with the political cancer he represents.

The GOP's waving Pelosi around to rack up wins, points to another hard-political truth. An odious name can make a difference--for better or worse. Trump proved that. His name and all the negatives that go with it hurt and helped him at the same time in the initial run-up to the GOP presidential race. He got few endorsements, no big donor contributions, and almost total scorn from the GOP party establishment. This helped him for the exact reasons it hurt him. It made him appear to be the consummate political outlier, the proverbial man on the white horse who would cleanse the corrupt, deal making beltway Washington swamp.

Pelosi recognized the albatross she is around the party. She bowed to the wishes of many Democrats to stay out of their districts during their campaigns. She low keyed her presence in the media, and low keyed even more her position as House Minority Leader. A Pelosi appearance with them would give fresh fire to a GOP opponent and Trump.

Yet, making herself scarce on the campaign trail, and turning over the top spot as House leader is a whole different matter. There are faint rumblings from some Democrats that they'll challenge Pelosi for that spot, it hasn't gone beyond that. The, you wash my hand, I wash yours boosterism, is simply too deeply entrenched in the way the two parties do business. The Democrat's House takeover gives Pelosi just enough to make her case that she deserves the House top spot again. If that happens, that's her gain and the party's loss. Just ask Trump.

Earl Ofari Hutchinson is an author and political analyst. He is the author of Make the Blue Wave More than Just Talk (Amazon). He is a weekly co-host of the Al Sharpton Show on Radio One. He is the host of the weekly Hutchinson Report on KPFK 90.7 FM Los Angeles and the Pacifica Network.

Earl Ofari Hutchinson is a nationally acclaimed author and political analyst. He has authored ten books; his articles are published in newspapers and magazines nationally in the United States. Three of his books have been published in other (more...)
Related Topic(s): Democratic; Elections; Pelosi-Nancy; Trumpism, Add Tags
Add to My Group(s)
Go To Commenting
The views expressed herein are the sole responsibility of the author and do not necessarily reflect those of this website or its editors.