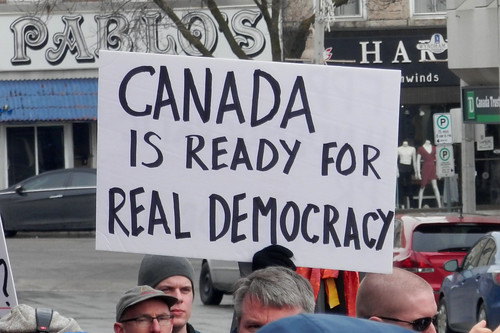 How do we make people question the lies they have been told? How do we make our voices heard? Direct action democracy is required.

In order to show politicians, the media and even many progressives that some of us are hostile to Canadian foreign policy we need to raise our voices and be disruptive in the cause of international solidarity.

Last Sunday Haitian Canadian activist Jennie-Laure Sully interrupted Justin Trudeau at a press conference to ask why Canada is supporting a corrupt, repressive and illegitimate president in Haiti. As the prime minister began to address a room full of political leaders (Montre'al mayor Vale'rie Plante, Green party leader Elizabeth May, NDP head Jagmeet Singh, etc.) Sully rose to ask her question. While Trudeau evaded the question in his response, everyone in the room and a couple thousand others online heard the question.

Sully's intervention was part of a series of similar actions by Solidarite' Que'bec-Haiti #Petrochallenge 2019. Since July 15 members of the Haiti solidarity group have interrupted two press conferences by Minister of La Francophonie and Tourism Me'lanie Joly. The message delivered at these events was that the Liberals need to stop propping up the corrupt, repressive and illegitimate Jovenel MoÃ¯se. We also raised our voices at a barbecue in her riding the unofficial launch of her re-election campaign where her staff sought to dissipate the challenge by offering a meeting with the minister (while simultaneously saying the invention hurt our cause!)

Clips of the various actions have been widely shared on social media and have generated significant coverage in Haitian media as well as Montre'al's Haitian community media. They've also received a bit of attention in the dominant Canadian media.

Over the past six months members of two small anti-imperialist groups Mouvement Que'be'cois pour la Paix and Palestiniens et Juifs Unis have directly challenged ministers on different aspects of the Liberals' foreign policy. We have interrupted:

A number of these actions garnered corporate media attention. Clips of almost all of them have been widely viewed on social media.

Raising our voices in Montreal has helped inspire similar actions in other cities. Ideally this could lead to a growing snowball of democratic engagement against pro-corporate and pro-empire foreign policy measures.

People are often reluctant to demonstrate their international solidarity because they think their voices will not be heard. In my experience these people crave signs of resistance. And acts of resistance generally beget more such acts.

There are many ways to confront a minister or politician. It's generally best if one individual focuses on filming the challenge while others speak. Depending on the context, it's good to have each individual make their speech one after another, which extends the disruptive impact. If there is media in the room, try to get directly in front of the camera and position any sign in a way that is easy to film. If one is uncomfortable about speaking in public write the message out or simply stand next to the politician with a placard. While better to divide tasks, it is possible (and maybe the only option if security is tight) to film oneself challenging a politician. Or after filming another's interruption film oneself making a statement.

Smart phones make it easy to record an intervention and social media makes it relatively easy to disseminate the video clips.

With the dominant media refusing to cover critical perspectives on important international issues, we need to find other ways to put forward our message and push back against government policies. We also need to give the decision-makers a bit of a headache and inspire like-minded individuals to act. Disrupting ministers and politicians at public events can be a high impact form of international solidarity and is an example of much needed direct action democracy.

Related Topic(s): Democracy; International Humanitarian Law, Add Tags
Add to My Group(s)
Go To Commenting
The views expressed herein are the sole responsibility of the author and do not necessarily reflect those of this website or its editors.