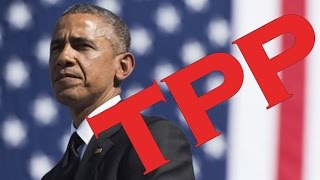 President Obama started a fresh push for the Trans-Pacific Partnership (TTP) on Friday when he sent Congress a draft Statement of Administrative Action.

That action means that after 30 days, the White House will be able to present Congress with legislation on the TPP.

And on Tuesday, Democratic presidential nominee Hillary Clinton chose Ken Salazar, who is an aggressively outspoken supporter of the TPP, to lead her White House transition team, despite the fact that Clinton has come out firmly against the TPP.

Salazar's appointment raises serious questions about what we can expect from a Clinton administration, and whether she's sincere in her opposition to the TPP and other so-called "free trade" deals that are still being negotiated.

And it's important to remember why these trade deals are so dangerous to begin with.

Activists from the right and the left have been working hard to raise awareness about the dangers of the TPP and its transatlantic cousin, the Transatlantic Trade and Investment Partnership (TTIP).

But by far the most sweeping deal that's being negotiated in secret and largely overlooked by activists is the Trade in Services Agreement, also known as TiSA.

TiSA will undermine citizens' privacy and governments' sovereignty, and negotiators are hoping to have a deal finalized by the end of this year.

Paola Casale at EconomyInCrisis writes bluntly about TiSA that, "You may be asking: 'how does this affect me?' The best one sentence response I can come up with is: 'how does this not affect you.'"

Fifty-one countries would be initially governed by TiSA, including the United States, the European Union, and 22 other nations from around the world, representing 70 percent of the world's services' trade.

If it goes into effect, it would cover close to 80 percent of the US economy that falls under the heading of "services."

"Services" is a broad term that covers all sorts of things, such as shipping, air travel, e-commerce, telecommunications, the internet, health care, financial services, engineering and the list goes on and on.

Based on leaked texts and summaries published by the European Union, it's clear that TiSA aims to go even further than the World Trade Organization (WTO) to globalize markets, functionally destroy national borders, and to create new corporate-friendly rules and regulations in sectors like e-commerce and financial services.

TiSA would include a "standstill clause" for financial services, and Switzerland has proposed that the agreement force all signatories to allow "any new financial service" to enter the market, which would virtually guarantee that banks all over the world, freed from sovereign regulation, would adopt the same sort of reckless speculation that destroyed the global economy just eight years ago.

Related Topic(s): Corporations; Privacy; Tisa; Trade, Add Tags
Add to My Group(s)
Go To Commenting
The views expressed herein are the sole responsibility of the author and do not necessarily reflect those of this website or its editors.