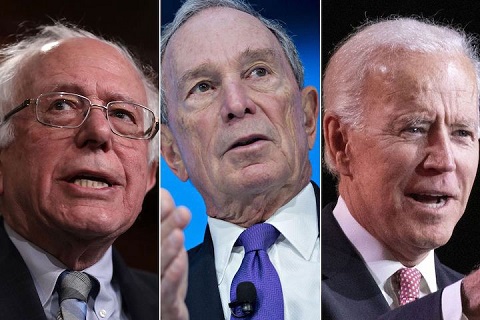 Pete Buttigieg's declaration of victory in Iowa reminded us that neither sex, sexual orientation or skin color is in any way intrinsic to a person's judgement the first gay or the first African-American or the first woman to do this or that may still be mired in the mediocrity of their convictions. Distinctions of identity may remain relevant, but it is the authenticity of their narratives that should concern us.

So it is that a grizzled old white guy whose performative chops are limited to pointing and shouting appears to have been bested by a smooth-faced, hyper-articulate young gay man when, in fact, what we are seeing is a profound ideological battle between the attempted destruction of capital, along with its attendant ills, and its preservation by any means, occurring within a contest in which the safeguarding of the status quo is the only acceptable outcome.

Despite briefly sparking to life in the New Hampshire debate, can we now safely consign Biden to the category of the walking dead? The Democratic National Committee's zombie candidate refuses to die. Joe has always been an empty suit. In 1988, he stuffed his elegantly draped fustian with some biographical features of a British politician, Neil Kinnock, whom he had a fancy to plagiarize. In 2008, he referred to fellow presidential candidate Barack Obama as "the first mainstream African-American who is articulate and bright and clean and a nice-looking guy", offering a searing glimpse of his blindingly white racist soul. Despite, or perhaps because of, exposing this characteristic shared by a large slice of the electorate, Barack chose him as his vice-president. Now, as a sort of twilight candidate in 2020, he hangs on for dear life to the coattails of his former boss, trusting that some of the president's gravitas will enliven the tailor's dummy. After his fourth-place finish in the heartland, it may be time again for him to retire his suit and aviator shades and reflect on his lifetime achievements of inflicting Clarence Thomas on the U.S. Supreme Court, and his son, Hunter, on Ukraine's Burisma Holding's corporate board.

The DNC is committed to maintaining the sham of American democracy whose plutocratic roots go back to the very beginning of the Republic when the then richest man in America became its first president by acclamation of his wealthy friends and neighbors. Over time, recognizing the liberal instincts of its subjects, the oligarchs have allowed for the expansion of voting rights to those whose interests are clearly not those of corporations and the uber-wealthy. But they have fought back by establishing programs of disenfranchisement, most famously under Jim Crow, gerrymandering, control of critical sections of the media, building the carceral state, limiting education and opportunity for the middle-class and the poor, requiring voting to take place on a work-day, establishing spurious ID requirements and simply purging voter rolls. This countervailing program of franchise restriction has been abetted, over the last decade, by the Supreme Court's Citizen's United decision which has resulted in a flood 'dark money' from corporations, oligarchs and offshore interests pouring into the election process.

The DNC itself has inaugurated a kind of junior league plutocracy whereby its presidential hopefuls must be validated by their supporters sending them cold hard cash. Money as a proxy for voting is the oligarch's foundational gambit and the anti-democratic forces of the DNC have now substantiated it in their farcical presidential primary process.

Just as the elite in Britain use the emotional ballast of royal regalia to deter rebellion, the wealthy ruling class in the U.S. call upon the trappings of the Constitution, the Bill of Rights, the Pledge of Allegiance, and the flag all conflated in the notion of American democracy to quash radical action that might challenge them. Even as its universality has been squeezed hard, the sop of voting the lure of having one's voice counted has been remarkably effective in guaranteeing the quiescence of the people.

The bastion of capital, which affords a dictatorship of the rich and the immiseration of its subject population, is supported by the twin pillars of neo-liberalism, the Republican and Democratic parties. Its walls are battle-hardened against rogue outliers such as Bernie, while the likes of Biden have spent their careers augmenting its fortifications. But there have been moments in that dictatorship, when chinks of humanitarian light have shone through its fortress walls. Its hostility to the wellbeing of its subjects is not necessarily guaranteed. Enter our third old white guy, Mike Bloomberg, flying the standard of the Democratic Party, but refusing to play by the DNC's rules.

At least since Jackson, America has been built on just enough democracy to ensure that the masses retain their Horatio Alger dreams believing the myth of equal opportunity and the chance to strike it rich but never enough to challenge the power of the wealthy. Hard work has been replaced by education as the base material of these dreams, but the latter obscures the debt peonage its achievement often requires and the low-level work it typically enables. Trader Joe's, the supermarket chain, requires all of its staff to have a college degree. Hard work counts for little in an age when the buying power of minimum wage has atrophied into insignificance. Voting, despite the purging of the rolls and other impediments to its practice, remains for many a feel-good way to connect to the grand mythos of America, inflating the self-worth of those who are otherwise victims of its deceits.

Material wealth, first as stolen land, then as industrial capital, and now as control of information (which today drives the forces of production through algorithms fed by real-time consumer desires, or clicks) is at the heart of the American pathology of exploitation, extraction, subjugation, oppression and the devastation of the natural world. Our putative democracy has been entirely enfolded into this ongoing historical project. It is an enabler of these crimes against humanity. It is an ideological co-conspirator.

Bernie proposes an 'allopathic' prescription for the overthrow of this world. He suggests that its corruption can be changed through the application of policies like Medicare for all, free college tuition, new taxes on the wealthy, slashing the defense budget, breaking up agri-business, the banning of fracking, and the overturning of the Citizen's United decision. He understands that money is the medium through which all corruption flows. Mike Bloomberg, proposes a 'homeopathic cure', to heal like with like and use 2% of his wealth, or a billion dollars, to ignore the DNC's beauty pageant, take on the billionaire incumbent and, as president, from deep within the bastion of capital, effect mildly progressive programs for the incremental improvement of the people's civic and domestic lives, while all the while sustaining the pernicious arc of the American project for a further four or eight years.

Of our three old white guys, we have a candidate who refuses to be bound to the DNC's rules, another whom it may refuse to anoint, and a third whose candidature is clinically dead.

The radical ideas proposed by the ancient Caucasian, cis-male senator from Vermont whose bid for the nomination was last time up-ended by Hillary's quest to be the first woman President of the United States, and is now challenged by the gay Pete Buttigieg and the women Amy Klobuchar and Elizabeth Warren may represent a step towards overthrowing the capitalist hegemony. It would be tragic if his inability to challenge by personal example perceptions of identity, except perhaps to confirm the value of the aged, should in any way limit the possibility of success for his campaign.

His is the only authentic voice for change.

Related Topic(s): Bernie Sanders; Democratic; Joe Biden; Michael Bloomberg; Presidential Election 2020; Voting, Add Tags
Add to My Group(s)
Go To Commenting
The views expressed herein are the sole responsibility of the author and do not necessarily reflect those of this website or its editors.