Three activists in Chicago for the NATO Summit protests -- Bryan Church, Jarred Chase, Brent Betterly -- are being charged with a major terrorist plot and "material support for terrorism" after they posted a video of police threatening the three with violence during the NATO summit.  The terror attacks were to include numerous Chicago police stations,  Obama's national campaign headquarters in the Prudential Building, and Rahm Emanuel's home in Ravenswood.  The National Lawyers Guild (NLG) contends the charges are fabricated and that the arrests are retaliation.  Guild attorney Michael Deustch charged that firebombs, "Molotov cocktails," were brought by undercover officers to the apartment where the three were staying.

National Lawyers Guild attorney Sarah Gelsomino who is representing the activists said "Charging these people who are here to peacefully protest against NATO for terrorism when in reality the police have been terrorizing activists in Chicago is completely outrageous."

The men's attorneys released photos of home brew beer making equipment after charges were handed down alleging the filling of beer bottles with gasoline.  Home brewers often use clean, empty beer bottles and reusable caps to store and refrigerate finished beer.  The Chicago Tribune reports that the National Lawyers Guild "scoffed at accusations of bomb making and insisted the NATO protesters simply possessed beer-making equipment."  A Molotov cocktail is a crude bomb made of gasoline in a bottle with a wick.  The beer-making equipment was confiscated by the CPD. 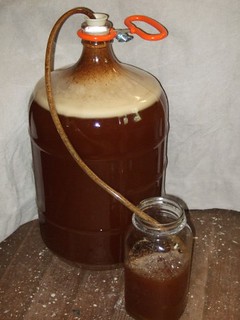 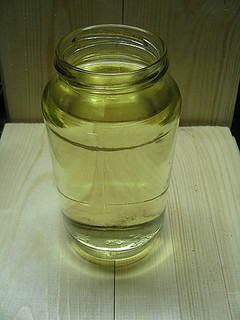 (Image by Unknown Owner)   Details   DMCA
Above: Color of gasoline in mason jar

The home brew equipment in the accuseds' apartment is filled with a liquid which seems to be beer, with foam on top.  For comparison, a photo from a home brewing website is below it, followed by a photo of a jar of gasoline, which is almost clear.

The attorneys also released a photo of the apartment after it had been overturned by police after an unwarranted search, below:

A total of 9 activists were initially arrested in the apartment raid on Wednesday night, May 16.  FireDogLake reports:

Dan, one of the activists, described a horrifying experience where he had been held for a "number of hours" but did not know how long exactly because the police did not ever give the activists the time. They were not charged at any point during their detention, but Dan says he was threatened with felony conspiracy charges.

The police held them as long as they did so they could get them to falsely confess or snitch on someone in the movement, Dan adds.

In the video which has gone viral on Youtube one officer can be heard in the video saying, "We'll come look for you, each and every one of you."   In the video the officers can be heard asking for and obtaining identification from at least two of the men.  The police can also be heard saying: