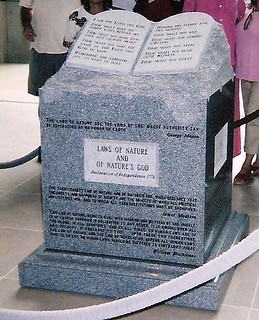 The Oklahoma Supreme Court this past week ordered the legislature and the executive branch to remove a six-foot tall Ten Commandments granite monument from the front of the state house.

The monument was placed there in January and is a direct violation of the First Amendment.
The response by dozens of legislators, most of whom may be illiterate about the Constitution, was to call for the impeachment of the justices. The state's attorney general who, presumably, took Constitutional Law in college, said he would appeal the decision. He, and many legislators, are also thinking of repealing the part of the state constitution that prohibits the use of public funds for religious purposes. The only question here is--how much taxpayer money will the state waste in the appeals and an action to rewrite the state constitution before the Supreme Court of the United States officially declares Oklahoma to be in need of long-term mental health assistance.

Over in Alabama, Ray Moore, the state's chief justice, thinks the Ten Commandments should be in front of the court house. The other eight justices disagreed with him, and the Alabama Court of the Judiciary removed him in 2003 from office for violating both the Constitution and a federal court order to remove the 5,200 pound granite block he had commissioned.

After several failed attempts to become the state's governor, Moore again ran for the office of chief justice, and was elected in 2012, still pledging to violate state and federal law.

I have no objections to the Ten Commandments being placed in public spaces, especially court houses and state capital lawns.

But, there are a few requirements I have.

First, God gave Moses the Ten Commandments, and entered into a covenant with the Jews more than 1,200 years before the seeds of Christianity were planted. God didn't give the Ten Commandments to the Southern Baptists, Muslims, Hindis, or even the Church of the Flying Spaghetti Monster. So, if the legislatures and other politicians want a Ten Commandments monument in public places, they must first become Jews.

It makes no difference if it's Orthodox, Conservative, or Reform. I don't care if they become Chassidic, Reconstructionist, or even secular Jews. But, they must become Jews. This would be God's will.
Second, because Jews tend to be more liberal in social issues than the rest of the population, the politicians would be expected to embrace universal health care, civil rights for all people--including the right of same-sex marriage, improved working conditions and wages, a strong commitment to those who are of the underclass of society, a tolerance and understanding of others' faiths, and activism for environmental and animal rights issues.

Third, they must follow all of the commandments, especially the one about not committing adultery.

It's not much to ask them to do. Become Jews. Embrace liberal social issues. And follow the commandments.

When they agree to these terms, I might be able to support them wanting to place the Ten Commandments on the lawns of their state houses--but only after they write a new Constitution, and reform the United States as a Jewish state, not unlike the socialist Israeli state.

[Dr. Brasch is a social issues journalist, retired university professor of mass communications, and author of 20 books. His latest is Fracking Pennsylvania, a definitive look at the economics, politics, and health, and environmental; effects surrounding fracking in the country.]