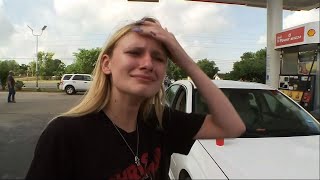 And it's the next one. Ten lives lost -- nine students and a teacher -- at a Santa Fe Texas High School.

One stunned young student survivor today told a reporter she wasn't surprised, just scared. Our kids are scared. We should be protecting them, but we're not. We should value their lives more than weapons, but we don't.

Texas Gov. Greg Abbott said the shooter used a shotgun and a .38-caliber revolver to carry out his attack. Abbott said the weapons belonged to the suspect's father. Is there any end to this madness? We are the only developed nation in the where children can arm themselves so very easily and kill their fellow students en mass.

She starts high school in August. Public school, a good one, with a notable performing arts program and a robust swim team -- just what she loves. It's less than two miles away, houses about 2,500 kids, and we pass it almost every day. She is so excited to go to high school and we are so terrified. More so than if she were enlisting in the army, which she cannot do at 14 and has no desire to do ever, thankfully.

More US students have died of gunfire in schools than US soldiers all over the world so far this year. 22 school shootings in the last 20 weeks, it's horrific. There was almost another disaster this week, but an Illinois police officer stopped a former student who opened fire at his school before anyone was hurt.

Thank God summer break is approaching so we can breathe a little easier for a few weeks.

We cannot fathom what the parents of all these murdered children must be feeling. It must be like dying yourself. You would die for your kids to protect them, trade your life for theirs, right? Lawmakers too, one would assume.

What did these parents do the last day their child was alive? What would we remember from Molly's last day alive? Fixing oatmeal for breakfast, like Mike? Driving to a Girl Scout meeting, like I do? Both for the last time. How do you survive having your child taken from you because our "leaders" in Congress are too afraid of the NRA to save these kids' lives? Then how do you go on knowing your child won't be the last one? Do they still pick up things for them at the store, forgetting for a moment they're dead?

I can't think about this most days or I go crazy.

Molly's high school is prepared. They have an armed security officer and a locked door -- gotta get buzzed in. But a student with concealed guns, they'd walk right in, right? Past the officer and through the door.

Kathy never expected a career in radio as a talk show producer. Born and raised in Atlanta, Georgia, Kathy was completing her nursing degree when in 2001 - in an emergency - she was asked to fill in as the producer of Mike's program. Within a few (more...)
Related Topic(s): Congress; High School Slaughter In Santa Fe Texas; NRA; Prayers; Schools; Shooter, Add Tags
Add to My Group(s)
Go To Commenting
The views expressed herein are the sole responsibility of the author and do not necessarily reflect those of this website or its editors.