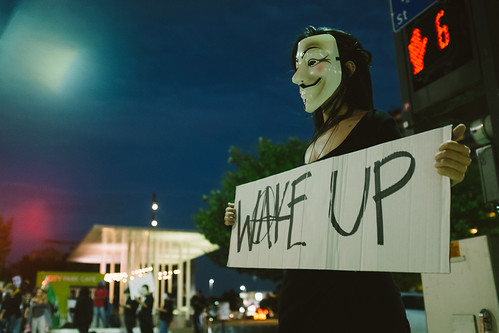 White Supremacy has been a tactic for dividing society the better to oppress not black people, but white people. All are caught up in a class warfare that enables elitism at the expense of the rest of us. Throughout history some have chosen to combat elitism and some have chosen to join it.

"We seek not to create social justice for ourselves, but rather to be first among pissants." This is a sad, awful decision to make, clearly, but the true evil at the root of it is social acceptance of oligarchy -- even by those who advertise themselves as liberal and anti-racist. What value does this insight have, if accurate? Well, it means that many accepting white supremacy as the best means to thriving probably deep down hate doing it and hate themselves for doing it. After all, it means accepting being allowed by more powerful white people to bully those you want to be economically better off than. You don't actually have power. You're just part of a sycophantic mob.

Do such people know this. You bet they do. At least many of them do. It takes a six-pack or a pint (or fifth) to bring this awareness to the level of expression sometimes, but I've witnessed it often.

So perhaps our goal should be less to demonize the race-haters than to (1) boundary them and (2) try to reach and recruit them. Liberalism has NEVER been a truly strong movement in this country. Once we're strong, we can provide an alternative. Strong now means not just phoning congressmen, and expressing disgust at things awful. It means showing up, in the streets, in great numbers, day after day, week after week and year after year. What better opportunity than now?

Related Topic(s): Awareness; People; Power, Add Tags
Add to My Group(s)
Go To Commenting
The views expressed herein are the sole responsibility of the author and do not necessarily reflect those of this website or its editors.