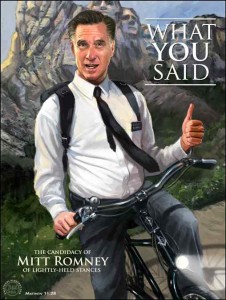 
. . . is that part missing from The Book of Mormon? Mr. Etch-a-Sketch seems to have a more-than-typical-politician's penchant for prevarication, especially when it comes to his own record.

Romney keeps eating his loafers. First he laughed-off the Order President Obama issued to take out bin Laden by saying that "even Jimmy Carter would've given that order," implying that Carter was some anti-military pacifist and Obama wasn't much tougher. But, as David Letterman astutely noted, President Carter graduated near the top of his class at the Naval Academy in Annapolis before helping develop the world's first nuclear submarine under the legendary Admiral Hyman Rickover. Mitt Romney wears a sailor hat and owns a yacht.

Now Romney has taken revisionist history to ridiculous proportions by claiming credit for President Obama's 2008/2009 bailout of the auto industry. In reality, Romney stated that he believed the US automakers should "go bankrupt." The fact that the President led a managed bankruptcy -- with a hefty $81 billion federal subsidy -- in no way validates Mitten's claim that he was responsible for the turnaround.

On Monday, Romney addressed a Cleveland audience, claiming: "I pushed the idea of a managed bankruptcy, and finally when that was done, and help was given, the companies got back on their feet. So, I'll take a lot of credit for the fact that this industry has come back."  (pssssttt ... Mitttens, years ago I wrote to Coca-Cola telling them I liked the "old Coke" better, but I don't think that's the reason they returned to their original formula ...)

Compare and contrast that with his expressed sentiments when the President actually took action to save the struggling Big Three automakers.:

"If General Motors, Ford and Chrysler get the bailout that their chief executives asked for yesterday, you can kiss the American automotive industry goodbye," Romney wrote in a November 2008 opinion article in the New York Times. "It won't go overnight, but its demise will be virtually guaranteed." Just to be clear, the article he wrote was titled -- "Let Detroit Go Bankrupt." Doesn't get much more clear-cut than that.

Is there a Mormon word for "chutzpah?" Maybe Mittens doesn't understand that google searches stretch alllllll the way back to 2008. The idea that Obama was on the fence about the action, and ONLY pushed for a managed bankruptcy after reading Romney's critical (and dead-wrong) NYT screed is laughable. About as laughable as claiming his military training/experience trumps Jimmy Carter's.

Are you paying attention, Neocons? Romney's claim that he's a better businessman than Obama and consequently would make a better CEO of America feels a little weak, given his initial gross mis-assessment and subsequent attempted cover-up with a Big Fat Fib over this one. Just sayin' ...

And did you hear the latest about Trinity Broadcasting and their efforts to sell salvation? Trinity is run by husband-and-wife televangelists Paul and Janice Crouch, a couple of mufti-millionaire thieving theologians from the far-flung fringes of the Rapture Right who have ripped off thousands of Americans touting something called the "prosperity gospel."

They certainly know how to practice what they preach. They received $100 million in donations in 2010 running their scam on thousands of unsuspecting souls who can only dream of realizing one millionth of the wealth these pseudo Christian con-artists have amassed.

"Mr. and Mrs. Crouch have his-and-her mansions one street apart in a gated community here, provided by the network, using viewer donations and tax-free earnings. But Mrs. Crouch, 74, rarely sleeps in the $5.6 million house with tennis court and pool. She mostly lives in a large company house near Orlando, Fla., where she runs a side business, the Holy Land Experience theme park. Mr. Crouch, 78, has an adjacent home there too, but rarely visits. Its occupant is often a security guard who doubles as Mrs. Crouch's chauffeur.

"The lavish perquisites, corroborated by two other former TBN employees, include additional, often-vacant homes in Texas and on the former Conway Twitty estate in Tennessee, corporate jets valued at $8 million and $49 million each and thousand-dollar dinners with fine wines, paid with tax-exempt money.

Wow -- sounds just like Jesus!  Wait a sec, there was that bit about the camel and the eye of the needle, and the bit about blessed are the poor ...

Kathy never expected a career in radio as a talk show producer. Born and raised in Atlanta, Georgia, Kathy was completing her nursing degree when in 2001 - in an emergency - she was asked to fill in as the producer of Mike's program. Within a few (more...)
Related Topic(s): Automakers; Bailout; Bankruptcy; Mitt Romney; Mormon; Obama; Theologians, Add Tags
Add to My Group(s)
Go To Commenting
The views expressed herein are the sole responsibility of the author and do not necessarily reflect those of this website or its editors.