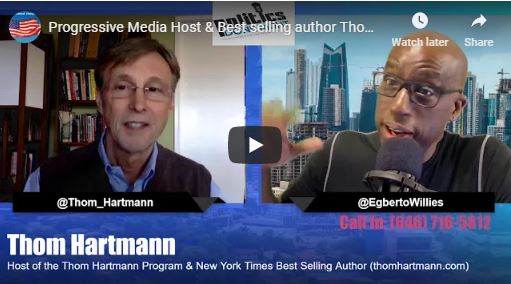 Thom Hartmann was recently the guest on Politics Done Right. He discussed his new book "The Hidden History of Guns and the Second Amendment," impeachment, and Medicare for All.

Thom Hartmann is the most listened-to Progressive talk show host in the country. The Thom Hartmann Program is still going strong. He is a New York Times bestselling author, and he is just an all-around good guy trying to make a difference in the country.

I told Thom Hartmann that I was upset with the Establishment Democratic Party because they are willfully attempting to sabotage Medicare for all. He concurred.

Thom Hartmann on Democrats & Medicare for All

Thom Hartmann did not mince his words as he told the inconvenient truth about the reasons for Establishment Democrats Medicare for All reluctance.

"Healthcare as an industry category basically encompasses maybe in the neighborhood of two to two and a half trillion dollars a year of our economy," Hartmann said. "It is a major part of our economy."

"Any business that is spinning off, that is burning through two trillion dollars a year can throw around millions if not hundreds of millions of dollars," Thom Hartmann continued. "That is chump change. And they are throwing that money down the throats of our politicians in Washington DC. So they own basically the entire Republican Party. The Entire Republican Party is on the take. ... But they also own half the Democratic Party."

When Democrats start using Right Wing talking points, especially those coming from the Partnership for America's Health Care Future (PAHCF), a front group for the Health Care Industrial Complex, it illustrates the depth of the betrayal of the Democratic base.

The two disingenuous attacks are that everyone will lose their private insurance and that one's taxes will go up. When taken out of context, support seems politically untenable.

The truth is most people, even with employer insurance, must change plans every year. Moreover, healthcare in the private sector is rationed and tightly controlled (what doctors you can see what medicine they will pay for, and much more).

For most people, their healthcare cost will go down substantially even as they have some marginal tax increase. They are free from copays and more.

Democrats need to have more faith in our citizens. Instead of expending their energies to promote Right Wing talking points to appease their benefactors, they need to support what is best for their base. It is a mathematical certainty that Single-Payer Medicare for All is the best option.

Related Topic(s): Thom Hartmann, Add Tags
Add to My Group(s)
Go To Commenting
The views expressed herein are the sole responsibility of the author and do not necessarily reflect those of this website or its editors.