A Texas sheriff who has adamantly and indefatigably worked on a criminal case against hauling company On Point Services LLC, that allegedly dumped hydraulic fracking waste all over eight miles of public roadways, is not a maverick lawman as some media outlets have reported him as being.

No, Karnes County Sheriff Dwayne Villanueva said he is just doing his job. Villanueva asserted that the media has erroneously portrayed him as a solitary actor - sort of a chivalrous environmental lone ranger - who is going after an alleged environmental violator.

Villanueva said the Karnes County Sheriff's Department is one of several government entities involved in the investigation of environmental infractions by On Point Services, which allegedly spilled as much as 1,269 gallons of toxic fracking waste on two rural roads in Karnes County.

Karnes County is in south-central Texas and the 2010 U.S. Census deemed it as having a population of 14,824 when the waste was spilled on March 10. (See: en.wikipedia.org/wiki/Karnes_County,_Texas.)

In a private telephone interview with this writer on Wednesday, July 16, Sheriff Villanueva said the other two main governmental entities associated with this case include the Texas Dept. of Public Safety (TDPS) and the Texas Railroad Commission.

"A lot of the news media are saying that we're filing criminal complaint charges. And they make it seem like we're acting on our own. This isn't true," the sheriff said.

"The Karnes County Sheriff's Dept. worked on this for three weeks. My staff went to a lot of the houses in the vicinity where the oil was spilled and asked residents if they had any surveillance footage. These roads are way out in the country," Villanueva added. 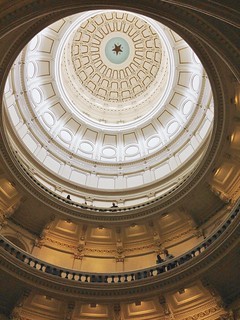 Inside the Texas State Capitol: In the Texas natural gas and oil rich south-central region, a sheriff and state agencies are going after a fracking waste hauling company.
(Image by Eric Titcombe)   Details   DMCA

It was time-consuming and labor-intensive for the Karnes County Sheriff's Dept. to conduct this investigation. Some Karnes County residents who live near the roads that had this fracking spillage leaked on them, along with a few business concerns located there, have game cameras, while other residences have surveillance cameras that keep a constant eye on houses, outbuildings, yards, and even farms and fields, he said.

"My staff went to every residence and company along the two roads and talked to people, asking them if they saw anything concerning this matter. We also requested surveillance or camera footage from them if they had any.... This was not an accident. This individual (the On Point Services truck driver) was going about his work routine and he was using defective equipment," Sheriff Villanueva told OpEdNews.com.

"There was a (fracking waste) spill - one of the worst oil spills we've ever had in Karnes county - and my chief deputy and investigators worked very hard on collecting surveillance footage, eyewitness testimony, and other evidence for three weeks. When we had everything in order, somebody from our office hand-delivered our findings to the Texas Dept. of Public Safety in Austin," Sheriff Villanueva said.

A branch of the state's Highway Patrol - the Texas Dept. of Public Safety - has special equipment and highly trained technical staff members who can clean up surveillance footage that may be grainy, dark, muddled, or sometimes even seemingly indecipherable, he mentioned.

"They get blurry film of corner store robberies and carryout stickups - even murders - and clean it up so suspects can be identified. It's amazing what they can do to footage that is very bad. They have the ability to make it clear, in many cases. They did this with our footage and we were able to identify the truck because of their work," Sheriff Villanueva explained.

And with cleaned-up surveillance footage, some eyewitness account information and other sharp detective work, the Karnes County Sheriff's Dept. was able to discover On Point Services was in violation of the spill, and the driver who was hauling the load that leaked was even able to be identified, too.

"We just conducted our investigation and the TDPS and the state Railroad Commission will be pursuing criminal actions, if they decide to go that route," Villanueva said.

Related Topic(s): Accident; Agencies; Fracking; Lone Wolf; Media; Oil; Oil; Sheriff; State; Waste And Fraud, Add Tags
Add to My Group(s)
Go To Commenting
The views expressed herein are the sole responsibility of the author and do not necessarily reflect those of this website or its editors.