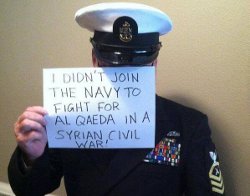 As the debate regarding a U.S. military attack on Syria shifts to Congress, Congressman Alan Grayson was back on national TV on Sunday, forcefully arguing against war:

Fredricka Whitfield: Joining me from Orlando, [Florida Congressman Alan Grayson] opposes any intervention [in Syria] at all. So, after hearing the President yesterday, Mr. Congressman, did the President say anything to change your mind?

Congressman Alan Grayson: No. It's not our responsibility. It's not going to do any good. It's dangerous. And it's expensive.

Fredricka: And what do you mean by that, when you say it won't do any good, when you hear Secretary Kerry spell out that letting a dictator like Assad go with impunity means that it sends a message to other dictators who might have chemical weapons that they could harm their people as well?

Alan: Absolutely not. And there are a huge number of Americans who agree with me. We set up a website called "DontAttackSyria.com," and got over 10,000 signatures in less than 24-hours. The polls show that people understand that this literally has nothing to do with us. We are not the world's policeman. We can't afford this anymore, these military adventures that lead us into more than a decade of war. It's wrong. We need to cut it off, before it even happens.

Fredricka: Is it at least comforting then to you, that the President, though he said he thinks justifiably that the U.S. should strike, still wants to hear Congressional approval? Is that any comfort to you, that he wants Congress to be thoughtful about this, and to give the green light or not?

Alan: Yes. In fact, the British went through the same process a few days ago and they came to the right conclusion. We're not the world's policeman. We're not the world's judge, jury, and executioner. No one else in the world does things like this, and there's no reason why we should. We've got 20 million people in this country who are looking for full-time work. Let's tend our own garden, for a change.

Fredricka: Now, you mention your [website] DontAttackSyria.com and that there are a number of signatures, a number of people on board with your point of view, but what about fellow Members of Congress? Where do you believe their allegiance will fall?

Alan: Their allegiance will fall with what makes sense for them in representing their districts. In my district, if you ask people, "Where does Syria fall in your list of concerns?" it wouldn't even be in the top 100. We would have to spend the billion dollars that this attack will cost, according to British authorities. The billion dollars that this attack will cost, that money is better spent on our schools, our roads, our bridges, our health care, and so on and so forth.

Fredricka: So if you had the opportunity to make your case to the President, what would it be? We understand that Senator McCain will be spending some one-on-one time with the President tomorrow. Senator McCain has been saying for a very long time that the U.S. needs to act. If you had that kind of face-to-face time with the President, what would you say to him as to why the U.S. should not go [through with] this - whether it has allies or whether it means going in alone?

Alan: Well, in fact, all the indications are that we will be going in alone. Even French public opinion is overwhelmingly against this, and the French were the only ones entertaining this possibility. It should tell the President something that when he is trying to vindicate so-called "international norms," that there are 196 countries in the world and no one else, NO ONE, wants to do anything like this. But what I would tell the President is, first, that no Americans have been attacked. None of our allies have been attacked. It's an unfortunate circumstance, but there are lots of unfortunate circumstances in the world. In Burma, for example, [there is now] a civil war that started 10 years before I was born, and twelve Presidents have resisted the impulse to interfere in the Burmese Civil War, even though far more people have died in the Burmese Civil War than in the Syrian Civil War. And I could give you countless other examples. Sometimes the highest international norm, the one to respect the most, is to mind your own business. And in this case, [military intervention] simply won't do any good. No one thinks that we're going to determine the outcome of the Syrian Civil War by lobbing a few missiles into Damascus. No one thinks that we will degrade or even eliminate the possibility of future chemical attacks by doing so. And in doing so, we'll be wasting a lot of money, and we'll be opening ourselves up to a counterattack. People forget this, but the U.S. Embassy in Beirut is 15 miles away from the Syrian border, and just down the block from Hezbollah. So if we attack them, and then they attack us, I think people can see where this is headed.

Fredricka: Congressman Alan Grayson, thanks so much, from Orlando today. We appreciate it.

Congressman Alan Grayson - you know where he stands. If you want to make your voice heard, then join our petition at www.DontAttackSyria.com. Tell your friends and neighbors, too. Time is running out.

Democratic Congressman from Florida's 8th congressional district.
Related Topic(s): Allies; Congress; Grayson-Alan; Petition; Syria; Withdrawal_From_Iraq, Add Tags
Add to My Group(s)
Go To Commenting
The views expressed herein are the sole responsibility of the author and do not necessarily reflect those of this website or its editors.