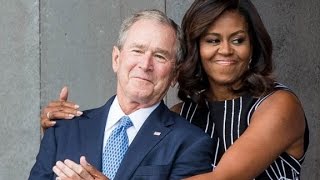 The fact that George W Bush has given Michelle Obama two pieces of candy is once again making headlines in mainstream outlets like Time, The Hill, and Newsweek. He has not given her any new pieces of candy since the last time he did so at his father's funeral. He also has not ceased to be the man who facilitated the murder of a million Iraqis and inflicted a whole new level of military expansionism and Orwellian surveillance upon our world. As near as I can tell, the only reason this story is once again making headlines is because Michelle Obama and the mainstream media have decided to bring it up again.

"He has the presence of mind and the sense of humor to bring me a mint, and he made it a point to give me that mint right then and there and that's the beauty of George Bush," Obama said of the war criminal in conversation at the SAP Center over the weekend, which we apparently need to know about because the news is telling us about it.

"We're all Americans. We all care about our family and our kids, and we're trying to get ahead," Obama continued. "And that's how I feel about [Bush]. You know? He's a beautiful, funny, kind, sweet man."

I have always respected Michelle Obama. But continuing to glorify a mass murderer responsible for the death of over a million defenseless innocent civilians, reflects more on her own character than on that of that despicable war criminal. pic.twitter.com/kpnRujHTgv

If you're starting to feel like attempts to rehabilitate George W Bush's image are being aggressively shoved down your throat by the mass media at every opportunity, it's because that is exactly what is happening. Every few weeks there's a new deluge of headlines explaining to consumers of mainstream media why they should love the 43rd president because he's such a cutesy wootsey cuddle pie, and completely forget about the piles upon piles of human corpses he is responsible for creating for no legitimate reason at all. The last Bush appreciation blitz was less than two weeks ago.

The mass media failed spectacularly to practice due diligence and hold power to account in the lead-up to the illegal and unconscionable Iraq invasion, not just the ghouls at Fox News but respected centrist outlets like CNN, the New York Times and the Washington Post as well. Bogus government reports were passed on uncritically and unquestioned, antiwar demonstrations with hundreds of thousands of protesters were ignored and downplayed, and the words "Saddam Hussein" and "9/11" were deliberately mentioned in the same breath so frequently that seven out of 10 Americans still believed Saddam was responsible for the September 11 attacks months after the Iraq invasion had occurred.

In an environment where the New York Times is instructing its readers how to "help fight the information wars" against Russia, the BBC is coaching its audience to scream the word "whataboutism" whenever a skeptic of establishment Russia narratives brings up Iraq, and the US Secretary of Defense is claiming that Putin is trying to "undermine America's moral authority," the massive credibility hit that imperial media and institutions took by deceiving the world into the destruction of Iraq matters.

Propaganda is a lot more important in cold war than in hot war since avoiding direct military confrontation limits the options of the participants, and Iraq is a giant bullet hole in the narrative of US moral authority which Moscow is rightly all too happy to point out.

Exactly this. This is a war on both morality & objective reality. People are rebranded "good" or "bad" not based on their actions, but whether or not they subscribe to a state mandated list of opinions. https://t.co/M3nZuozsZ8

It makes no sense to have mainstream western media outlets uncritically manufacturing support for wars and coaching their audiences on how to help government agencies fight "information wars" against Russia while also criticizing RT as "state media," unless you can say that western media functions as an arm of the US government for moral reasons while RT does so for immoral reasons. It makes no sense for the US to criticize Russian military interventionism when the US is vastly more guilty of vastly more egregious forms of military interventionism, unless the US can claim its interventionism is moral while Russia's is immoral.

Related Topic(s): Crimes Against Humanity; George Bush; Iraqis; Michelle Obama; Murder; News Media, Add Tags
Add to My Group(s)
Go To Commenting
The views expressed herein are the sole responsibility of the author and do not necessarily reflect those of this website or its editors.