Bernie Sanders's moral outrage and devastating sarcasm struck back against a GOP assault on poor and low-income workers. 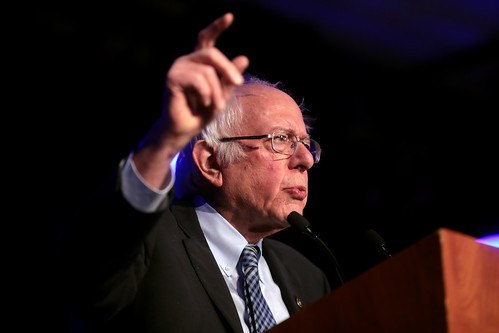 Republicans are using the coronavirus outbreak as an excuse to do the same thing they did during the financial meltdown of 2008: wage class war against working Americans. This time, Bernie Sanders is refusing to let them get away with it.

Employing a combination of moral outrage and devastating sarcasm, the Vermont senator shamed Republicans in a Wednesday Senate floor speech that ripped into them for prioritizing corporate bailouts while objecting to providing a measure of security for low-wage workers who have lost their jobs as much of the American economy has ground to a near halt.

"How absurd and wrong is that? What kind of value system is that?" demanded Sanders, as he railed against a Republican amendment that would have constrained benefits at a time when the unemployment rate is skyrocketing. Even in the midst of the crisis, the senator thundered, "Some of my Republican friends have still not given up on the need to punish the poor and working people."

In a matter of minutes, during a debate that focused on just one portion of a huge measure, Sanders illustrated how an opposition party is supposed to operate, and what it's supposed to sound like. Refusing to let Republicans peddle the nonsense that invariably serves as a cover for the awful combination of bailouts for the wealthy and austerity for the working class, Sanders pushed back.

It was a fight Sanders expected to win, but it was the way he fought it that mattered: He hit as hard as the Republicans. And he claimed the moral high ground -- inspiring the hashtag #ThankYouBernie to trend on social media as the Rev. Dr. William J. Barber II wrote, "#ThankYouBernie for pointing out the immorality of Republicans funding big business & trying to strip out the few things in the bill to help poor & low income workers."

Related Topic(s): Billionaires; Corporations; Crisis; Democratic; Families; Financial; Jobs; Pandemic; Workers, Add Tags
Add to My Group(s)
Go To Commenting
The views expressed herein are the sole responsibility of the author and do not necessarily reflect those of this website or its editors.