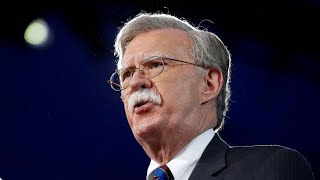 Casual references to annihilation pop up every day in American life. That makes it harder to communicate the danger posed by Donald Trump's appointment of John Bolton as National Security Advisor.

Bolton has poor judgement, a mean spirit, and an intellect that's weaker than he thinks. He spreads ethnic hatred and argues for sending others to fight and die.

This weekend, young people around the country stood up against gun violence in their schools. Bolton's appointment tells us that senseless violence may soon dominate our foreign policy, too, even more than it already does.

Bolton seems to pursue Machiavelli's dictum that "it is much safer to be feared than loved." But it's not safer. As we've learned from Bolton's past mistakes, foolish wars bring fresh dangers as well as needless tragedies.

Machiavelli also said, "The first method for estimating the intelligence of a ruler is to look at the men he has around him." This appointment confirms what many of us already thought about Trump's intelligence.

But Bolton's no Trumpian deviation from social or political norms. He's a political insider, beloved by think-tankers and mainstream media outlets alike. They're already clucking their tongues in disapproval at Bolton's appointment, but it's all for show.

Bolton's one of them.

Emails From the Apocalypse

Progressive social media and discussion groups were burning with news of Bolton's appointment. Many notes were variations on a theme: "Goodbye, everyone, it's been nice knowing you."

Could North Korea really launch a nuclear strike on the United States? Apparently, it's possible. But most of the people sending those notes are probably safe. The Korean Peninsula is the likeliest target, with the Middle East second. Kim Jong-un would need some luck to reach the West Coast of the United States, although that will be of scant comfort to Seattle or Portland residents if it does come to pass.

But every war death is a personal apocalypse. With or without nuclear weapons, there are likely to be many more deaths now that Bolton has been appointed. His proposed attack on nuclear-armed North Korea would almost certainly bring war to South Korea as well. He also advocates preemptive war against Iran. Either action would lead to mass death and chaos.

But then, Bolton is the ambassador of chaos. He was an enthusiastic backer of both the Iraq invasion and the overthrow of Muammar Gaddafi, two moves that destabilized the entire Middle East and led to the formation of ISIS.

Bolton has been associated with Mujahidin e-Khalq (MeK), an Iranian terror-linked insurgent group that has reportedly been very generous with its friends in Washington. He is also, incontestably, a bigot. Bolton is closely associated with fellow Islamophobes Pamela Geller, who once asserted that Barack Obama is "the love child" of Malcolm X and "was involved with a crack whore," and the alt-right white supremacist Richard Spencer. Charming.

Bolton is the chair of a fake-news source, the Gatestone Institute, which publishes false, hate-filled screeds against Muslims. "The fact-checking website Snopes has found multiple false viral stories originating with Gatestone," writes The Intercept's Lee Fang.

Related Topic(s): Chaos; Dangerous; Iran; Korea; People John Bolton, Add Tags
Add to My Group(s)
Go To Commenting
The views expressed herein are the sole responsibility of the author and do not necessarily reflect those of this website or its editors.