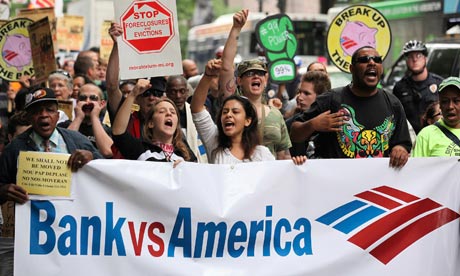 Last fall, I argued that the violent reaction to Occupy and other protests around the world had to do with the 1%ers' fear of the rank and file exposing massive fraud if they ever managed get their hands on the books. At that time, I had no evidence of this motivation beyond the fact that financial system reform and increased transparency were at the top of many protesters' list of demands.

But this week presents a sick-making trove of new data that abundantly fills in this hypothesis and confirms this picture. The notion that the entire global financial system is riddled with systemic fraud -- and that key players in the gatekeeper roles, both in finance and in government, including regulatory bodies, know it and choose to quietly sustain this reality -- is one that would have only recently seemed like the frenzied hypothesis of tinhat-wearers, but this week's headlines make such a conclusion, sadly, inevitable.

The New York Times business section on 12 July shows multiple exposes of systemic fraud throughout banks: banks colluding with other banks in manipulation of interest rates, regulators aware of systemic fraud, and key government officials (at least one banker who became the most key government official) aware of it and colluding as well. Fraud in banks has been understood conventionally and, I would say, messaged as a glitch. As in London Mayor Boris Johnson's full-throated defense of Barclay's leadership last week, bank fraud is portrayed as a case, when it surfaces, of a few "bad apples" gone astray.

In the New York Times business section, we read that the HSBC banking group is being fined up to $1bn, for not preventing money-laundering (a highly profitable activity not to prevent) between 2004 and 2010 -- a six years' long "oops." In another article that day, Republican Senator Charles Grassley says of the financial group Peregrine capital: "This is a company that is on top of things." The article goes onto explain that at Peregrine Financial, "regulators discovered about $215m in customer money was missing." Its founder now faces criminal charges. Later, the article mentions that this revelation comes a few months after MF Global "lost" more than $1bn in clients' money.

What is weird is how these reports so consistently describe the activity that led to all this vanishing cash as simple bumbling: "regulators missed the red flag for years." They note that a Peregrine client alerted the firm's primary regulator in 2004 and another raised issues with the regulator five years later -- yet "signs of trouble seemingly missed for years", muses the Times headline.

A page later, "Wells Fargo will Settle Mortgage Bias Charges" as that bank agrees to pay $175m in fines resulting from its having -- again, very lucratively -- charged African-American and Hispanic mortgagees costlier rates on their subprime mortgages than their counterparts who were white and had the same credit scores. Remember, this was a time when "Wall Street firms developed a huge demand for subprime loans that they purchased and bundled into securities for investors, creating financial incentives for lenders to make such loans." So, Wells Fargo was profiting from overcharging minority clients and profiting from products based on the higher-than-average bad loan rate expected. The piece discreetly ends mentioning that a Bank of America lawsuit of $335m and a Sun Trust mortgage settlement of $21m for having engaged is similar kinds of discrimination.

Are all these examples of oversight failure and banking fraud just big ol' mistakes? Are the regulators simply distracted?

The top headline of the day's news sums up why it is not that simple: "Geithner Tried to Curb Bank's Rate Rigging in 2008." The story reports that when Timothy Geithner, at the time he ran the Federal Reserve Bank of New York, learned of "problems" with how interest rates were fixed in London, the financial center at the heart of the Libor Barclays scandal. He let "top British authorities" know of the issues and wrote an email to his counterparts suggesting reforms. Were his actions ethical, or prudent? A possible interpretation of Geithner's action is that he was "covering his ass," without serious expectation of effecting reform of what he knew to be systemic abuse.

And what, in fact, happened? Barclays kept reporting false rates, seeking to boost its profit. Last month, the bank agreed to pay $450m to US and UK authorities for manipulating the Libor and other key benchmarks, upon which great swaths of the economy depended. This manipulation is alleged in numerous lawsuits to have defrauded thousands of bank clients. So Geithner's "warnings came too late, and his efforts did not stop the illegal activity."

And then what happened? Did Geithner, presumably frustrated that his warnings had gone unheeded, call a press conference? No. He stayed silent, as a practice that now looks as if several major banks also perpetrated, continued.

And then what happened? Tim Geithner became Treasury Secretary. At which point, he still did nothing.

It is very hard, looking at the elaborate edifices of fraud that are emerging across the financial system, to ignore the possibility that this kind of silence -- "the willingness to not rock the boat" -- is simply rewarded by promotion to ever higher positions, ever greater authority. If you learn that rate-rigging and regulatory failures are systemic, but stay quiet, well, perhaps you have shown that you are genuinely reliable and deserve membership of the club.

Whatever motivated Geithner's silence, or that of the "government official" in the emails to Barclays, this much is obvious: the mainstream media need to drop their narratives of "Gosh, another oversight". The financial sector's corruption must be recognized as systemic.

Meanwhile, Britain is sleepwalking in a march toward total email surveillance, even as the US brings forward new proposals to punish whistleblowers by extending the Espionage Act. In an electronic world, evidence of these crimes lasts forever -- if people get their hands on the books. In the Libor case, notably, a major crime has not been greeted by much demand at the top for criminal prosecutions. That asymmetry is one of the insurance policies of power. Another is to crack down on citizens' protest.

Author, social critic, and political activist Naomi Wolf raises awareness of the pervasive inequities that exist in society and politics. She encourages people to take charge of their lives, voice their concerns and enact change. Wolf's landmark (more...)
Related Topic(s): Banks; Corruption; Finance; Fraud, Add Tags
Add to My Group(s)
Go To Commenting
The views expressed herein are the sole responsibility of the author and do not necessarily reflect those of this website or its editors.