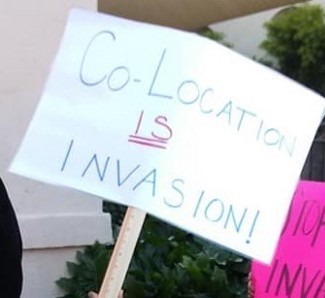 (Image by anonymous)   Details   DMCA
most vulnerable students be protected from the results of PROP-39?"
- Question asked at a candidate forum

While the charter school industry says that they exist to provide choice for students, these publicly funded private schools have little respect for the 80% of students whose parents have chosen to enroll them in LAUSD public schools. This is best illustrated in the way that charter schools force their way onto public school campuses with little regard to how this will hurt the students who attend the affected school. As voters go to the polls in LAUSD Board District 3, one of the schools in this region, Shirley Avenue Elementary, is fighting against this type of invasion.

Board Member Scott Schmerelson describes Shirley as "a shining example of how our public schools can be the anchor for surrounding communities." The school has done this by cultivating programs for enrichment activities and services required by the neighborhood. Additionally, its programs for children with special education needs are enhanced with rooms to provide specialized services.

As a success story, Shirley should be looked upon as a school whose programs should be replicated. Instead, Citizens of the World Charter School (CWC) has set its sights on taking over part of Shirley's campus to start a new school. Under the current interpretation of PROP-39, the rooms used to provide services at Shirley are considered to be "empty" because they do not have a teacher assigned to them. Never mind the fact that they are used for lessons in robotics, a place for parenting classes to be held, or for psychological services to be provided to children with special education needs, these classrooms are treated as if they are cobweb ridden, abandoned spaces available for the taking.

At a candidate forum held by an alliance of neighborhood councils within the board district, Schmerelson and his opponent, Marilyn Koziatek, were asked about the co-location at Shirley and what they would do to protect the most vulnerable students. Unfortunately, neither candidate addressed the specific issue of special education. However, it was clear by their answers whose interests were more important to each of the candidates.

Given the fact that the charter school industry is spending millions of dollars on Koziatek's campaign, it should not be surprising that she failed to mention any of the concerns of the Shirley community during her response. Instead, she complained that the parents from Shirley had protested against the co-location, mischaracterizing their complaints as being directed "against children" instead of against the charter school's management. She even asked Schmerelson to explain "why he felt he wanted to protest those children" by showing up at the protest by members of the Shirley community to hear their concerns.

Koziatek said in her response that we should "be advocates for high-quality education for all kids", that we should treat each other with dignity and that "children at Shirley Avenue Elementary deserve the best...period." However, she provided no empathy for Shirley's present students and the fact that their education would be diminished by this co-location. Instead, she saved all of her concern for a brand new school that had yet to have students step through their doorway. She also did not propose any solutions to the problem.

Board Member Schmerelson reiterated his support of "existing, high-functioning charter schools that are fiscally responsible, operate in a transparent manner, and comply with district policy and oversight." This support does not extend to expansion by the charter school industry in Los Angeles, especially as "85% of current charter schools are under-enrolled."

While Schmerelson acknowledges that some charter schools are fulfilling their mission of innovation, he notes that the majority of independent charters "do not outperform, or barely outperform our traditional LAUSD neighborhood schools." He prefers that charter schools do not co-locate with public schools as it "causes a lot of problems with students and parents." It is better that charter schools locate on their own properties.

Members of the LAUSD School Board are supposed to represent and advocate for the 80% of students who attend LAUSD public schools like Shirley. Koziatek's answers showed that she is either incapable of or unwilling to work on behalf of these schools. In comparison, Schmerelson displayed his willingness to support charter schools that meet their responsibilities, while also making sure that LAUSD students are not harmed by charter school expansion. It is clear who will put the interests of public school students first.