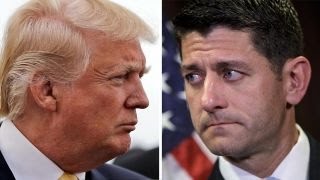 How the GOP civil war will play out
(Image by YouTube, Channel: Fox News)   Details   DMCA
>

As the dust refuses to settle from the 2018 midterms, there are stubborn reminders that there really are two Americas when it comes to voting and elections.

This week, Republican-majority legislatures in Michigan and Wisconsin -- both created by GOP-led extreme gerrymanders in 2011 -- are trying to rush through legislation to strip power from Democratic statewide winners of executive branch offices in November.

"They lost and they're throwing a fit," was how Jon Erpenbach, a Wisconsin Democratic state senator, put it to the New York Times.

But that's not quite correct. In many otherwise purple states, the GOP has been rejecting political norms -- such as respecting popular vote outcomes -- and grabbing power in any manner it can for years. The Wisconsin and Michigan moves echo what North Carolina Republicans have pursued since 2016 after that also GOP-gerrymandered state elected a Democratic governor, where its legislature targeted gubernatorial powers, state election boards and even its state judiciary.

The latest Republican bullying doesn't make Democrats the political party of angels -- as amply demonstrated in their post-2016 presidential reforms (where, instead of adding more national convention delegates to reflect a growing diversity, they sidelined loyalists for the first vote to nominate 2020's candidate). But what's going on in some GOP-led states is especially troubling because it shows a brazen partisan disregard for election results.

The power grabs in Wisconsin and Michigan are making headlines this week, but they are not alone. Only last week did Georgia's losing Democratic gubernatorial candidate, Stacey Abrams, file a federal suit that detailed an extraordinary barrier-filled playbook wielded by her competitor, former Secretary of State Brian Kemp, to thwart multitudes. (A runoff is being held Tuesday, December 4, to determine Kemp's successor.)

Go back a few weeks and there were GOP-led barriers in North Dakota in the form of a new state law that said voters must show IDs with street addresses to get a ballot, which thousands of Native Americans lacked. There were similar barriers in New Hampshire, where its GOP-led legislature acted to complicate voting for university students.

In Arizona, the GOP Secretary of State offered bland excuses when advocacy groups noted that the motor vehicle agency was not forwarding address changes from 380,000 Arizonans to county officials, which would stymie delivery of mail-in ballots. Missouri faced another version of this voter data snafu. In Kansas, a GOP Secretary of State lost the governor's race, but not before his allies tried to limit Latino voting. And Florida's U.S. Senate recount was marked by GOP accusations of vote fraud until their candidate won in a recount by less than 0.002 percent of 8-million-plus votes cast statewide.

These examples are reminders that the GOP is a party with a strong streak not only of reluctance to relinquishing power or heeding vote outcomes, but also of seeing it as politically virtuous to do whatever it takes to preserve its power. The biggest example of this reflex is its ongoing packing of the federal courts, which began in President Obama's final years, when the GOP-led Senate refused to seat scores of appointees and a Supreme Court justice, but now is filling benches with Federalist Society-approved right-wingers.

One can only speculate where these dysfunctional dynamics are headed. It is perhaps too easy to take heart in some of 2018's apparent voting rights victories -- without wondering aloud what partisan ambushes may lie ahead.

The biggest victory for voting rights and criminal justice reform was Florida's passage of Amendment 4, which ended the blanket disenfranchisement of 1.4 million ex-felons. The ACLU says that vote created the largest group of new voters in America since the 1971 passage of the 26th Amendment lowering the national voting age to 18.

On the partisan gerrymandering front, four states -- Colorado, Michigan, Missouri and Utah -- passed ballot initiatives to create non-legislative commissions to draw up their congressional and statehouse districts after the 2020 U.S. census. In Michigan, voters also passed Election Day registration (as did Maryland).

"Suppression of voters continues to be an urgent national problem with severe implications for racial justice and the fairness of our elections. But these reforms are real victories that deserve to be celebrated," wrote Bobby Hoffman, ACLU Advocacy and Policy Counsel, on the ACLU blog.

Steven Rosenfeld  covers democracy issues for AlterNet. He is a longtime print and broadcast journalist and has reported for National Public Radio, Monitor Radio, Marketplace,  TomPaine.com  and many newspapers. (more...)
Related Topic(s): Gop Voter Registration Scandal; Party Politics Republican; Voting, Add Tags
Add to My Group(s)
Go To Commenting
The views expressed herein are the sole responsibility of the author and do not necessarily reflect those of this website or its editors.