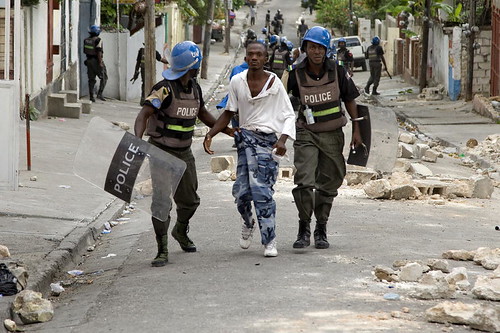 Last year, when the Bolivian people fought back against brutal repression to force out the coup regime that the U.S. empire installed in 2019, the imperialists quietly went into panic mode. Secretary of State Mike Pompeo looked visibly discouraged at the news that the Movement for Socialism (MAS) Party's Luis Arce was to become the country's president. Just a year after Washington had used its terrorists to force out the previous MAS president Evo Morales, the indigenous proletarian movement had reversed the counterrevolution.

What had been going through Pompeo's mind? That Washington's state-building capabilities must be weakening for the coup regime to have been so swiftly strong-armed by the protesters? That even Israel's post-coup assistance of the regime's repressive forces must have some defect if these forces weren't able to overcome the MAS militias? That this loss of another neo-colony following the socialist revolutions in Cuba, Nicaragua, and numerous other countries was backing Washington into an unprecedented geopolitical and economic corner? That the Organization of American States will surely now have a much harder time selling its pro-coup narratives now that its blatant lies about Morales perpetrating "election fraud" had been exposed?

More likely, these kinds of thoughts were only subconscious. The imperialists don't grasp dialectics or the dynamics of class and national liberation struggles, because they're blinded by their idealistic belief in the inevitable triumph of neoliberal "markets." Their self-overestimation throughout their war against the Taliban shows this. Their hubristic failure to stop Vietnam from becoming socialist showed this. Their ongoing failure to carry out regime change in Cuba, Venezuela, Nicaragua, Russia, China, the DPRK, and Iran shows this. When all their strength proved futile against the forces of class and anti-colonial struggle in Bolivia, they didn't learn from their self-sabotaging actions. They intensified a series of reactions that are accelerating the process of imperialist self-destruction.

In March of this year, less than six months after the Bolivia coup had been reversed, the new secretary of state Antony Blinken declared that "We are deeply concerned by growing signs of anti-democratic behavior and politicization of the legal system in Bolivia. The Bolivian government should release detained former officials, pending an independent and transparent inquiry into human rights and due process concerns." Blinken was responding to the arrest of Jeanine Áñez, the official who had seized the office of president following the Bolivia coup. Blinken's statement followed a claim earlier that month from Human Rights Watch"--"-the "humanitarian" organization with ties to the U.S. government"--"-about the rights of Áñez supposedly having been violated by Arce's government.

This transparent ploy to start manufacturing consent for a new coup in Bolivia followed a plot by far-right paramilitary leader and coup regime-era Bolivian minister of defense Luis Fernando López. López aimed to use U.S. mercenaries to overturn the results of the country's election, and to carry out a new coup. As The Intercept reported last month, López had been in contact with civilian administrator to the U.S. Army Joe Pereira, who promised that "I can get up to 10,000 men with no problem. I don't think we need 10,000. " All Special Forces. I can also bring about 350 what we call LEPs, law enforcement professionals, to guide the police."

The imperialist media continues to try to delegitimize Arce's government in the minds of the U.S. public, parroting the State Department's narrative that the investigations of Áñez for sedition and terrorism are unjustified. These and other indications of an ongoing desire for neo-colonial restoration in Bolivia have caused Morales to warn about an intensification of meddling across Latin America:

The sending of war materials by the former presidents of Ecuador, (Moreno), and Argentina, (Macri), and the letter of thanks from General Terceros are further evidence that, together with the assassination of the President of Haiti, by former Colombian military personnel, show the execution of a second Condor Plan under U.S. direction. We alert the Latin America social movements about #PlanCóndor2 and the need to strengthen the struggle for peace with social justice and democracy to preserve the sovereignty and independence of our States and the dignity of the people. In the face of the Bolivian right wing and its US-paid media that lie and do not show a single piece of evidence of the alleged fraud [2019 elections], more evidence continues to appear about those who participated in the 2019 coup d'e'tat and the support given by anti-popular governments with war material and money. We reaffirm that #PlanCóndor2 is underway and we must agree on measures so that the right-wing governments of Latin America do not continue to participate in coups d'e'tat under the leadership of the United States, causing mourning and pain to our peoples. We warn the people, militants, sympathizers, patriotic military and professionals committed to their country: We are in the sights of the U.S. because we recovered our natural resources, nationalized strategic companies and closed the military base in Chimore'. They do not forgive us.

The imperialists have indeed been busy in Latin America since the coup regime's defeat. This spring, they flooded Ecuador with manufactured "leftist" factions which divided the anti-rightist vote and caused the anti-IMF candidate to lose. Colombia shows where Ecuador is headed because of this reactionary turn.

Throughout Colombia's anti-austerity protests of the last several months, the Nazi-influenced Colombian government has carried out world-shocking police brutality. And Washington has remained complicit in the mutilations, murders, arbitrary detentions, and kidnappings. All that the U.S. Congress has passed in response to the atrocities is a condition stating that Colombia's National Police will only receive counternarcotics aid if the U.S. Department of State finds Colombia to be sufficiently combating human rights violations. This measure was clearly only done to give Washington plausible deniability for its ongoing backing of Colombian state terror, as the U.S. State Department is the last institution that will hold a neo-colonial government accountable.

To prepare for the attempted ouster of Peru's soon-to-be-inaugurated leftist Pedro Castillo, the U.S. has appointed a CIA officer as ambassador to Peru. The failure of the racist and anti-communist campaign to negate the vote count, which focused on disenfranchising Peru's indigenous population, is evidently a stepping stone towards a longer-term campaign of meddling within the country. One that's paralleled by the effort to oust Mexico's mildly anti-imperialist government, which finds itself up against a billionaire-backed extremist organization called the National Anti-AMLO Front.

The Front's goal is to overthrow AMLO, the country's left-leaning president, through the same kinds of color revolution tactics that the U.S. empire is now targeting Cuba with. Since the vandalism-filled recent anti-communist protests in Cuba have reportedly occurred with the aid of U.S.-funded mercenaries, whatever unrest these reactionaries stir up within Mexico or Peru in the coming years is going to involve similar destabilization agents.

Chile is another prime target, since the communist Palestinian candidate Daniel Jadue has emerged as the frontrunner in its election; even though Jadue has clarified that he has a problem with Zionists and not Jews, he's being targeted with accusations of antisemitism by the rightists. Despite these charges being based off of comments written by Jadue's schoolmates several decades ago, the charges were recently propagated by members of the U.S. Congress. While ignoring the antisemitic death squads that Washington funds within fascist-controlled Ukraine, a group of U.S. lawmakers has warned Blinken about a "dangerous climate" of antisemitism within Chile that Jadue is implied to be complicit in. Perhaps Blinken will soon express another statement of concern, no doubt just as genuine as his last one.

The imperialists may also bring their meddling to Brazil, which has lately been undergoing anti-Bolsonaro protests. Bolsonaro's recent incitements of paranoia over election fraud in the country's 2022 election, which parallel the cries from the Peruvian right about Castillo having "stolen" the election and Trump's conspiracy theories about the 2020 election being rigged, could produce a version of the U.S. Capitol Hill Riot that has the backing of the CIA.

Alternatively, the empire could let Bolsonaro lose to the rising social democratic candidate Lula da Silva, who carried water for the imperialists the last time he was in power by sending Brazilian troops to occupy Haiti. Should Lula be co-opted in this way again, it will advance Washington's unfolding scheme to crush Haiti's liberation struggle. As anthropologist Jemima Pierre assessed in 2015, before the 2016 U.S. coup that ousted Lula, Lula was already engaged in a campaign to further imperialist militarization in Haiti and elsewhere:

For Brazil, the country in Latin America with the largest Black population and a supposedly leftist government, Haiti is its "imperial ground zero." Brazil has used its contribution to the occupation of the Black Republic to demonstrate its credentials as a regional power and to show the Americans and Europeans that it is ready for a permanent seat on the UN Security Council. For Brazil, Haiti is also a training ground for domestic security and enforcements; its Haitian forces return to the country and deploy the tactics of military terror on its own poor Black and Brown favela dwellers.

Related Topic(s): American Imperialism; Intervention, Add Tags
Add to My Group(s)
Go To Commenting
The views expressed herein are the sole responsibility of the author and do not necessarily reflect those of this website or its editors.