AtPeace Makita is a single mother of five, a life long resident of Detroit, and the Creative Director of the Detroit Water Brigade. She wants you to know that the push for the privatization of the water supply in Detroit could be coming to an area near you soon.

"If Detroit can be used as a prototype," asks Makita "why can't it happen in LA, Chicago, or New York? On top of the bankruptcy, on top of the foreclosures, on top of the mayoral issues and emergency manager, on top of all of it -- now you want to take our life source?"

Watch the clip below, or you can watch the full episode here. 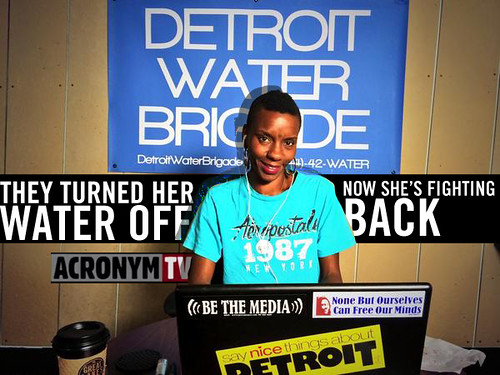 Dennis Trainor, Jr. is the creator and host of Acronym TV and the writer, director and producer of the documentary American Autumn: an Occudoc.
Related Topic(s): Backlash; Public Water System; War For Water; Water; Water Conflict; Water Conservation; Water Infrastructure US; Water Policy; Water Pollution; Water Rights; (more...) Water Supply; Water Wars; Watercolors, Add Tags  (less...)
Add to My Group(s)
Go To Commenting
The views expressed herein are the sole responsibility of the author and do not necessarily reflect those of this website or its editors.