Click Here to Remove All Ads
On March 30, 1976, the Palestinian people declared a general strike and demonstrated against the Israeli confiscation of thousands of acres of land in the Galilee. The Israeli's responded with violence, killing six unarmed Palestinian demonstrators and injuring hundreds. Every year Land Day is commemorated in Palestine in remembrance of those who would rise up to protect their land. 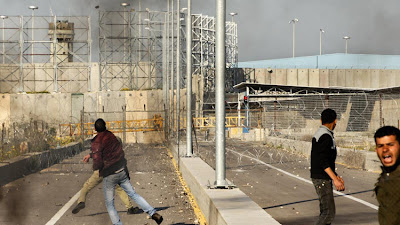 On this Land Day, I was at Erez Crossing. Several hundred youth had managed to find their way around the Hamas policemen blocking the roads leading to Erez. At the crossing, they moved to within 200 yards of the Israeli gate. There they found their path blocked by rows of concertina wire across the road. The shabob set fire to tires in the roadway and threw stones towards the Israeli wall, most falling into the roadway, well short of their target. Intermittently and without warning, the Israeli occupation forces open fire on the stone throwers. Each volley consists of one to three shots, and with each volley, young men fall. Others immediately retrieve them. Dozens of youth mob the wounded. Somehow they manage to carry them through the crowd and load them onto motorcycles where they are ferried to the Palestinian side of the crossing to waiting ambulances. 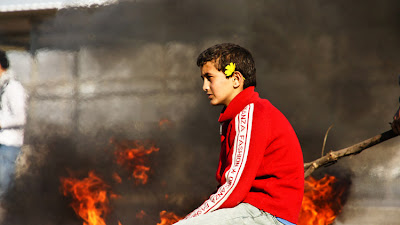 I wonder about the young soldiers, picking their targets amongst the crowd and firing, like shooting fish in a barrel. I remember in 2002, the head of the IAF, Dan Halutz was asked what it felt like releasing a bomb over Gaza, and he said, "No. That is not a legitimate question and it is not asked. But if you nevertheless want to know what I feel when I release a bomb, I will tell you: I feel a light bump to the plane as a result of the bomb's release. A second later it's gone, and that's all. That is what I feel."

I disagree with Halutz on this point. In any caring world this is a completely legitimate question. It is the answer that rings of illegitimacy. It is the answer of a sociopath. I wonder if this dehumanization trickles down to the soldiers opposite us. I wonder what they feel. 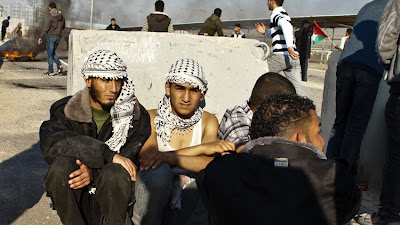 And I wonder about the young stone throwers, completely exposed to the guns of the Israelis, knowing full well someone is going to be shot.
As the latest injury drives off on the back of a wobbly motorcycle, the shabob turn back to the wall and hurl a barrage of stones. Some grab onto the concertina wire and begin pulling it away from the road. I wait for the crack of the M-16's and look to the front to see who has fallen. "We are going to Jerusalem, millions of martyrs" the shabob chant, and the shouts ring out "Allahu Akbar!" Some young men, blood covered, reach in and try to help each new casualty, others sit on the sidelines, taunting the newly injured, mimicking their cries as they are carried off.
In the moment, I am overwhelmed with the futility of throwing stones at a concrete barrier as the Israelis methodically pick people from the crowd and shoot them. 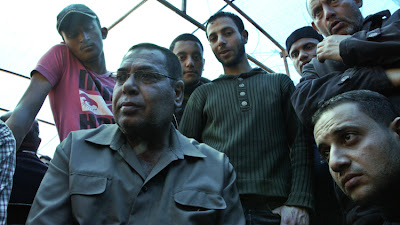 At the mourning tent of the only fatality that day, Mahmoud Zaqout, who would have been 20 years old on April 19, I speak to his father, Mohamed and his cousin, Nizar Zaqout.
Mohamed said he was proud of his son, the sixth son of seven boys. He says he was a quiet child, a loving child, and though he was soon to be 20, he was still a child. 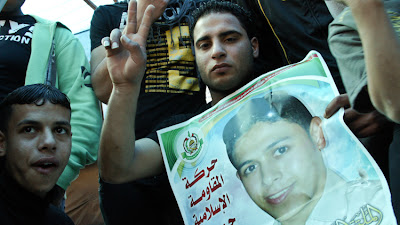 (Image by Unknown Owner)   Details   DMCA
Mahmoud's cousin, Nizar, who was at Mahmoud's side at Erez, hobbles over to us on crutches, to talk about the moments leading up to Mahmoud's death. They had traveled to Erez with two friends. They carried a Palestinian flag. Nizar tells us Mahmoud had a premonition of his impending death, and prior to entering the crossing he stopped to pray. They decided to move forward and place the Palestinian flag on the gate. In order to do this they would need to move the razor wire blocking the road and they began pulling on it. Israeli soldiers, crouching behind concrete blocks signaled to them as if to say, "What are you doing, you'll see what happens."

On seeing the soldiers the two friends retreat. Mahmoud and Nizar continued pulling on the wire, determined to place the flag at the gate. Nizar said the soldiers signaled them with thumbs up. Shots rang out. Nizar and Mahmoud turned and ran. Nizar saw the blood on Mahmoud's neck, after a few steps, Mahmoud collapsed in Nizar's arms. Nizar carried his cousin back to the crowd of Palestinian youth. He held his hand over the wound as they were loaded onto a motorcycle. When they reached the ambulance, an attendant pointed to Nizar's bleeding thigh. He had been shot as well.
I asked Nizar what he felt as he faced the soldiers. He said they were prepared to hang the flag on the gate or be shot. He spoke of his family's history of resistance, the loss of an uncle during Cast Lead, and his determination to fight. "Even today, I want to pray in Jerusalem. This is our right. Since we were born, Mahmoud and I have protested the Israelis." 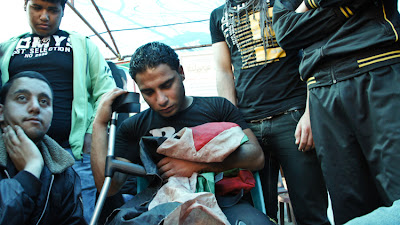 Someone handed Nizar a blood-stained flag. The blood was Mahmoud's. Nizar held the flag close to his cheek, breathing deeply. Breathing in the blood-stained cloth, Mahmoud, his lost uncles, and all the sorrow and loss of Palestine, Nizar paused. He said, "Mahmoud could not place the flag at the gate. I will. Or my children will. We will continue to resist until we win our rights. Mahmoud's blood will not be wasted. Hundreds will take his place. We will fight for our rights, for our children, we will fight until we get our land back."
"The occupiers want us to forget about our land, and about Jerusalem, by turning our focus on our troubles -- no jobs, no cooking fuel, no power, no gasoline, but we will not forget. My family is a family of resistance. My uncles have been killed, they've been to prison. They died for Jerusalem. Everyone around you here may die for Jerusalem. We are proud to do this," Nizar exclaims. I turn and look at all the young faces surrounding us, listening intently.
As we get up to take our leave, Nizar asks where I am from. When I answer America, he says some in Gaza view America as the enemy. He said he appreciates my presence because it was critical to inform Americans about what is happening in Gaza.

(Image by Unknown Owner)   Details   DMCA
This is what is happening in Gaza. The 36th anniversary of Land Day has come and gone. Israeli soldiers shot two young men, armed only with a flag, from point-blank range. Over the course of the day, they shot dozens of young men, all armed with nothing more than stones. While I stood in Erez Crossing, no tear gas or other methods of crowd dispersal were employed. No warning shots were fired. Every shot hit flesh. American media does not find the story newsworthy. Nakba Day, "The Catastrophe," is next, on May 15. The youth will return to Erez Crossing. How many will be shot? Will the world take note?
In Gaza, the resistance remains, and is carried by the youth. I realize the struggle is not futile, Palestinians resist with what they have. They are not taught to hate, they are taught to demand their rights and stand for freedom.
Mohamed says, "For these demonstrations all the young men go, we do not stop them, it is their struggle. I am proud that Mahmoud went to the front of the crowd. We resist as our grandfathers did." He says these words so quietly I can hear his heart breaking.

I have traveled to Iraq, Israel, Palestine, Lebanon, Jordan, Syria, Gaza and Afghanistan to bear witness and document the suffering of people who are affected by war. I advocate for reconciliation and nonviolent strategies in the face of (more...)
Related Topic(s): Death; Israel; Jerusalem; Palestine_and_Israel; Palestinian; Shootings; Youth Revolt, Add Tags
Add to My Group(s)
Go To Commenting
The views expressed herein are the sole responsibility of the author and do not necessarily reflect those of this website or its editors.