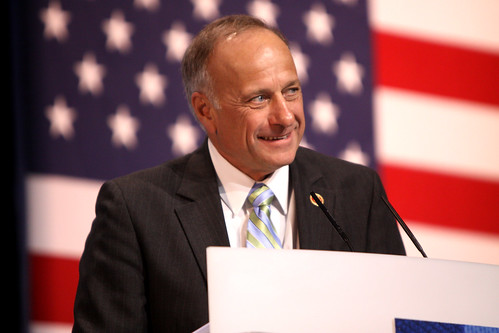 Iowa GOP congressman Steve King has made a political career out of saying the most outrageous, inflammatory racist quips and digs a sitting congressperson could think of. The eight-term incumbent knows two things will happen when he pops off. One is that he'll get loads of press attention and that in turn means lots of chatter about how terrible a guy King is or a wink and a nod that that's just King again. But it's the second thing that's the most telling. That happened again with the latest King racial offense. It was his retweet of a tweet by Mark Collet a long time British white supremacist and Hitler cheerleader. Not one top GOP party leader or elected official uttered a word of disapproval, let alone condemnation of King.

Then again, that's been par for the course for the GOP through decades of King' racial broadsides. GOP apologists shrug their shoulders claim that some GOP figures have criticized King. That's true, but the GOP figures they're talking about are GOP outliers. There are no elected officials or top party leaders among the King alleged critics. The other lame explanation for their silence is that keeping their mouths closed about King is the best way to make sure that his racial bile doesn't get any media or public shelf life.

This might make some sense except for one thing. Long before King was ever thought of politically, GOP leaders never denounced any of the long line of racial bigots and their bigoted digs and actions. Whether King existed or not, this still won't change for a very good reason. Peddling, pandering to, or ignoring racism and racists within and without the GOP has paid and continues to pay politically well for the GOP. A tip came during a cable talk show appearance in 2010, when Senate Minority Leader Mitch McConnell flatly refused several direct, angled, and nuanced efforts to discuss racism in the Tea Party. The NAACP had just passed a resolution demanding that the GOP speak out and speak out loudly against the racists among them. But McConnell was having none of it.

McConnell's duck and dodge of the issue was no accident. He and the party would cut its throat if it denounced its racists and racism, and really meant it. That was on grotesque display during the Obama white House years. The shouts, taunts, spitting, catcalls, Obama as Joker posters, n-word slurs, Confederate and Texas Lone Star flag waving by some Tea Party activists, and the deafening silence from GOP leaders was an indispensable political necessity for the party.

The racial ploy that Trump has used to masterful effect to reignite the GOP's traditional white rural, none college educated and low income blue collar workers he stole from the GOP's ancient playbook. The GOP could not have been competitive during the 2008 and 2012 campaigns, and most importantly the 2016 campaign, without the bailout from these voters. Much has been made that they are a dwindling percent of the electorate, and that Hispanics, Asian, black, young, and women voters will permanently tip the balance of political power to the Democrats in coming national elections. Blue-collar white voters have shrunk from more than half of the nation's voters to less than 40 percent.

This is a dangerous assumption. Elections are usually won by candidates with a solid and impassioned core of bloc voters. White males, particularly older white males, vote consistently and faithfully. They vote in a far greater percentage than Hispanics and blacks and that's always been the case in the nation's mid-term elections.

GOP leaders have long known that blue-collar and a significant percent of college educated, white male voters, who are professionals, can be easily aroused to vote and shout loudly on the emotional wedge issues, with immigration now front and center on the list. These are the voters who GOP presidents and aspiring presidents, Nixon, Reagan, Bush Sr. and George W. Bush, McCain and Romney, and an endless line of GOP governors, senators and congresspersons have banked on for victory and to seize and maintain regional and national political dominance.

There are millions of GOP backers in the South and Heartland, and the gaggle of right-wing webs, blogs, and talk radio jocks that have made it amply clear the GOP's only flub is that it's not truly conservative enough. They have hammered the GOP that any retreat from its core beliefs and message will perpetually doom it to political extinction in national politics. They warn that if the GOP suddenly started pandering to minorities and gays it could kiss millions of their fervent supporter's goodbye.

The GOP will need those votes and voters even more in November to stave off the expected big challenge from Democrats to at least take back the House. This is where King and the other King clones in the GOP come in. They'll wave the racial flag high and remind GOP loyalists that the party is still their voice on anything that remotely touches on race. They'll do that as always with their silence.

Earl Ofari Hutchinson is an author and political analyst. He is the author of the forthcoming Why Black Lives Do Matter (Middle Passage Press). He is a weekly co-host of the Al Sharpton Show on Radio One. He is the host of the weekly Hutchinson Report on KPFK 90.7 FM Los Angeles and the Pacifica Network.

Earl Ofari Hutchinson is a nationally acclaimed author and political analyst. He has authored ten books; his articles are published in newspapers and magazines nationally in the United States. Three of his books have been published in other (more...)
Related Topic(s): Conflict In The Republican Party; Congressman Steve King; Racism; Republican Party, Add Tags
Add to My Group(s)
Go To Commenting
The views expressed herein are the sole responsibility of the author and do not necessarily reflect those of this website or its editors.