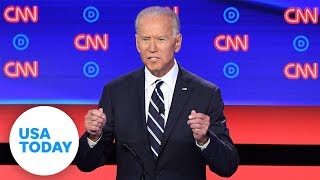 The comedian George Carlin liked to marvel at oxymorons like "jumbo shrimp" and "military intelligence." Now, as the race for the Democratic presidential nomination intensifies, reporters and pundits at corporate media outlets are escalating their use of a one-word political oxymoron "moderate."

As a practical matter, in the routine lexicon of U.S. mass media, "moderate" actually means pro-corporate and reliably unwilling to disrupt the dominant power structures. "Moderate" is a term of endearment in elite circles, a label conferred on politicians who won't rock establishment boats.

"Moderate" sounds so much nicer than, say, "enmeshed with Wall Street" or "supportive of the military-industrial complex."

In the corporate media environment, we're accustomed to pretty euphemisms that fog up un-pretty realities and the haze of familiarity brings the opposite of clarity. As George Orwell wrote, language "becomes ugly and inaccurate because our thoughts are foolish, but the slovenliness of our language makes it easier for us to have foolish thoughts."

If Joe Biden is a "moderate," the soothing adjective obscures grim realities. The framing was routine hours after the debate Wednesday night when the front page of The New York Times began its lead story by reporting that Biden "delivered a steadfast defense of his moderate policies in the Democratic primary debate."

But how are policies really "moderate" when they perpetuate and increase extreme suffering due to vast income inequality? Or when they support U.S. wars causing so much death and incalculable anguish? Or when they refuse to challenge the fossil-fuel industry and only sign onto woefully inadequate measures in response to catastrophic climate change?

Biden's record of words and deeds is "moderate" only if we ignore the extreme harm that he has done on matters ranging from civil rights and mass incarceration to student debt and the credit card industry to militarism and war.

Although Biden again tangled with Kamala Harris during the latest debate, she is ill-positioned to provide a clear critique of his so-called "moderate" policies. Harris has scarcely done more than he has to challenge the systemic injustice of corporate domination. So she can't get far in trying to provide a sharp contrast to Biden's corporate happy talk on the crucial issue of healthcare.

Harris began this week by releasing what she called "My Plan for Medicare for All." It was promptly eviscerated by single-payer activist Tim Higginbotham, who wrote for Jacobin that her proposal would "further privatize Medicare ... keep the waste and inefficiency of our current multi-payer system ... cost families more than Medicare for All ... continue to deny patients necessary care" and "fall apart before it's implemented."

In keeping with timeworn rhetoric from corporate Democrats, Harris repeatedly said during the debate that she wants to guarantee "access" to healthcare using a standard corporate-friendly buzzword that detours around truly guaranteeing healthcare as a human right.

No matter whether journalists call Harris "moderate" or "progressive" (a term elastic enough to be the name of a huge insurance company), her unwillingness to confront the dominance of huge corporations over the economic and political life of the USA is a giveaway.

Whatever their discreet virtues, 18 of the 20 candidates who debated this week have offered no consistent, thoroughgoing challenge to corporate power. Among the contenders for the Democratic presidential nomination, only Bernie Sanders and Elizabeth Warren are providing a coherent analysis and actual challenge to the realities of corporate power and oligarchy that are crushing democracy in the United States.

Related Topic(s): Corporate; Democracy; Moderate; Nomination, Add Tags
Add to My Group(s)
Go To Commenting
The views expressed herein are the sole responsibility of the author and do not necessarily reflect those of this website or its editors.