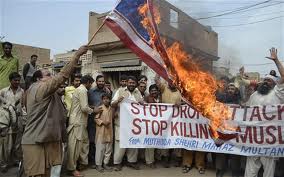 (Image by Unknown Owner)   Details   DMCA
The horror of our drone strikes killing innocent civilians as well as terrorist "suspects" in Africa and Central Asia is having a devastating effect on both our national psyche and our diminishing moral standing in the world. Warfare is ugly and the brutal, bloody consequences of sending military forces into a foreign land to kill and be killed has served -- to varying degrees -- as a block on the trigger of US war-making capabilities. Our leaders have been forced to weigh the casualties, the risks, the damage done to our own troops before committing them to a foreign battlefield.

Drone strikes end that deliberative process. They are clinically deadly and spotless. Unmanned aircraft silently, effortlessly rain death and destruction on individuals below with no fear of loss of American lives. It's too easy, and the legacy we are creating with such atrocities will not be forgotten by future generations of Islamists who will forever associate the United States with these cold, calculated, faceless murder-machines. We are becoming Al Qaeda's number one recruiting tool.

And now, it's worse. Today the New York Times reports how our very own Justice Department has asserted the right to use these drones to kill American citizens if they are suspected of being members of Al Qaeda...

"Obama administration lawyers have asserted that it would be lawful to kill a United States citizen if 'an informed, high-level official' of the government decided that the target was a ranking figure in Al Qaeda who posed "an imminent threat of violent attack against the United States" and if his capture was not feasible, according to a 16-page document made public on Monday."

Think about that. No due process, no criminal investigation, no right to a legal defense -- just a flat-out judicial murder if the government believes you are a terrorist or are associating with one or in the proximity of one. Most disturbing, there seems to be a great big, hazy definition of exactly how an American citizen is identified as an Al Qaeda member or supporter. After all, they don't exactly wear uniforms or share a secret handshake. The NYT article continues, describing the fuzzy nature of how this US government document would define a member of Al Qaeda:

"It adopts an elastic definition of an 'imminent' threat, saying it is not necessary for a specific attack to be in process when a target is found if the target is generally engaged in terrorist activities aimed at the United States. And it asserts that courts should not play a role in reviewing or restraining such decisions."

"Singing" John Ashcroft and Alberto "Torture Memo" Gonzales must be smiling, realizing that the darkest, most unspeakable portions of their Patriot Act proposals are alive and thriving under an

"Hina Shamsi, director of the American Civil Liberties Union's National Security Project, called the paper 'a profoundly disturbing document,' and said: 'It's hard to believe that it was produced in a democracy built on a system of checks and balances. It summarizes in cold legal terms a stunning overreach of executive authority -- the claimed power to declare Americans a threat and kill them far from a recognized battlefield and without any judicial involvement.'"

How can we maintain even the pretense of that proverbial City on a Hill, that Glorious Land of Opportunity, of Lady Liberty welcoming the tired and poor to her sheltering shores of freedom if we now openly target our own citizens for extra-judicial extermination?

Kathy never expected a career in radio as a talk show producer. Born and raised in Atlanta, Georgia, Kathy was completing her nursing degree when in 2001 - in an emergency - she was asked to fill in as the producer of Mike's program. Within a few (more...)
Related Topic(s): Atrocities; Citizens; Death; Drone Bombing Americans; Drone Bombing Of Chidlren; Drone Wars; Killing; Orwellian, Add Tags
Add to My Group(s)
Go To Commenting
The views expressed herein are the sole responsibility of the author and do not necessarily reflect those of this website or its editors.