Trump is counting on the working class he's betraying most aggressively. Can the left get out of affluent suburbia and back to its roots? 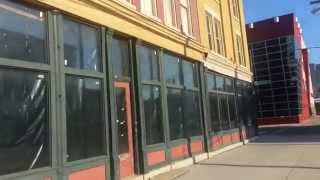 It's a slightly shabby landscape dotted by warehouses, churches, fast food restaurants, and at the margins an old arthouse theater. If you look closely, you can see the building where I went to kindergarten, and maybe even the dive bar where my wife and I had our first date.

A photo of this familiar landscape greeted me recently in an unfamiliar place: at the top of a New York Times feature headlined, "How the G.O.P. Became the Party of the Left Behind."

half of Americans now work low-wage jobs. Manufacturing remains in decline, farm bankruptcies are spiraling, and union membership just hit an all-time low. Even as 140 million Americans are poor or low-income, the administration is working relentlessly to shred Medicaid, Social Security, and the food stamp system.

Peter Certo is the acting editor of Foreign Policy in Focus (fpif.org) and the associate editor of Right Web (rightweb.irc-online.org). Both publications are projects of the Institute for Policy Studies.
Related Topic(s): American Hypocrisy; American Imperialism; American_Apartheid; Americans Elect; Decline; Food; Jobs; Medicaid, Add Tags
Add to My Group(s)
Go To Commenting
The views expressed herein are the sole responsibility of the author and do not necessarily reflect those of this website or its editors.

3 people are discussing this page, with 3 comments