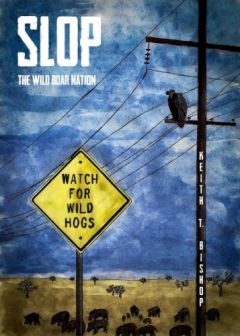 Slop The Wild Boar Nation
(Image by Keith Bishop)   Details   DMCA
6 October 1961, two years before the Cuban Missile Crisis, President John F. Kennedy urged Americans to build Bomb/Fallout shelters. Throughout his presidency, Donald Trump continues to align himself with those same enemies of America, soliciting their interference in our electoral process, and now, on a headline grabbing whim, facilitating Turkish violence against the Kurds America's staunch ally in our resistance to ISIS.

There will be no Better Angels until we make ourselves better allies to our friends in arms embracing a peace that's beyond our understanding.

Yes, increasing sinister darkness has overshadowed our vision of self, intimacy and union, widening our divide with a deceit that camouflages the light of connection with, all that glitters - one camp in blind obedience to self-serving leaders, and the other in denial that any departure of Trump/Pence will, nonviolently return America to, The Land of the Free, unscathed.

There will be no Better Angels, until we make ourselves better at facing the good, bad and ugly truth that, it's not just Trump.

Perhaps, our heroic global stand in response to Pearl Harbor to victoriously defend the world from a vile unimaginable foreign evil, our Greatest Generation, returned home believing our lives and nation could now be, if not a Shangri La, a more Justice for All, New Deal.

Perhaps such euphoria lulled us into a complacency vulnerable to imperceptible malevolent transformation from valiant to subservient chess pieces on the avarice board of corporatism's contorting , The Marshall Plan into The Military Industrial Complex.

There will be no Better Angels, until we make ourselves better at evolving from past assumptions to clarity regarding current enemies, foreign and domestic.

What is it that feeds the fear that fuels the hate that blunts our ability to honor our, Republic if you can keep it from an Attorney General of religious hypocrisy, silence is consent Vice President, and a conservative Republican Senate: proud recipients of Watergate, Iran Contra and Bush/Cheney perpetual oil wars?

There will be no Better Angels, until we make ourselves better citizens, being hereby resolved to elect better servants of the people.

Fighting among ourselves, we've become willing tools of the real enemies of the state, trolling our three co-existing, though not co-equal, branches of government Congress being the only branch empowered to remove presidents, judges and Supreme Court Justices from office.

When in a 2019 reality check, we remain oblivious to the lessons of"

Cherry-picking both Bible and Constitution, we even make war on our need for intimate communion, shaming ourselves for desiring the healing power of mutually loving, touch.

There will be no Better Angels until we make ourselves better than Citizens United and haters of LGBTQ neighbors, allowing Conservative corporate money to decay America's lawful institutions in the manipulative power grab of an apathetic president and his morally bankrupt allies - so hazardous to the health of our nation and planet.

There will be no Better Angels until we make ourselves better to each other than servants to financiers changing our climate:

There will be no Better Angels, until we make ourselves better stewards of earth and better electorate for America.