The president is the puppet master so Americans of all persuasions must look behind him, to where the real danger lies 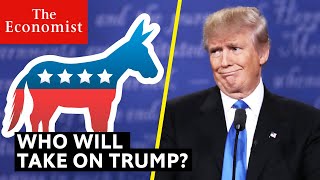 Who will challenge Donald Trump in 2020?
(Image by YouTube, Channel: The Economist)   Details   DMCA

I keep hearing that the Democratic party has moved "left" and that Democratic candidates may be "too far left."

Donald Trump wants to be a dictator. It's not enough just to laugh at him

But in an era of unprecedented concentration of wealth and political power at the top, I can't help wondering what it means to be "left."

A half-century ago, when America had a large and growing middle class, those on the "left" sought stronger social safety nets and more public investment in schools, roads and research. Those on the "right" sought greater reliance on the free market.

But as wealth and power have concentrated at the top, everyone else whether on the old right or the old left has become dis-empowered and less secure.

Safety nets have unraveled, public investments have waned and the free market has been taken over by crony capitalism and corporate welfare cheats. Washington and state capitals are overwhelmed by money coming from the super rich, Wall Street and big corporations.

So why do we continue to hear and use the same old "right" and "left" labels?

I suspect it's because the emerging oligarchy feels safer if Americans are split along the old political battle lines. That way, Americans won't notice they're being shafted.

In reality, the biggest divide in America today runs between oligarchy and democracy. When oligarchs fill the coffers of political candidates, they neuter democracy.

The oligarchs know politicians won't bite the hands that feed them. So as long as they control the money, they can be confident there will be no meaningful response to stagnant pay, climate change, military bloat or the soaring costs of health insurance, pharmaceuticals, college and housing.

So long as the oligarchy divides, Americans split off people of color from working-class whites, stoke racial resentments, describe human beings as illegal aliens, launch wars on crime and immigrants, stoke fears of communists and socialists, it doesn't have to worry that a majority will stop them from looting the nation.

Divide-and-conquer allows the oligarchy free rein. It makes the rest of us puppets, fighting each other on a made-up stage.

Related Topic(s): Money; Oligarchy; Right Wing Bankrupting US Govt; Right Wing Selling Off America; Rights Denied; Trump Bully In Chief; Trump Racist, Add Tags
Add to My Group(s)
Go To Commenting
The views expressed herein are the sole responsibility of the author and do not necessarily reflect those of this website or its editors.