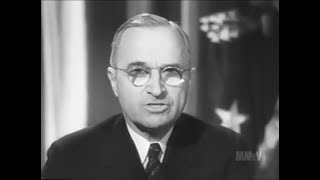 On January 11, the Washington Post took readers back to April 8, 1952, the day President Harry Truman (above) declared the nation was in a crisis.

That journey resonates with our present moment as President Trump repeatedly insists the nation in a crisis because it does not have a wall separating the U.S. from Mexico.

President Trump demands that Congress authorize five billion plus dollars to "complete" the wall he deems essential for the nation's security.

The weakness of his case rests on the definition of what constitutes a crisis.

President Truman acted on April 8, 1952. as this nation was winding down its involvement in a real war in Korea. Union workers in the nation's steel mills were on strike. Owners of those mills refused to yield to the workers' demands.

President Truman was a political ally of unions. He was reluctant to force the striking workers to return to work. They were, after all, an important part of his "base." He was unwilling to offend his "base" by forcing an end to the strike.

President Trump is not dealing with a strike. But his "base" had been hoodwinked by fear and fantasy. His "base," those voters who helped put him in the White House after he promised to block immigrants from "pouring across the southern border," demand their wall.

President Trump, the master hood-winker, wants the wall because he believes that what he wants, he must have. Nor does he want to arrive at reelection time in 2020 without winning his battle of the wall.

He threatens to get his five billion plus dollars from other pouches in the federal budget... legitimate pouches designed for real emergencies. Congress has refused to give him his wall money for what Mark Summer described in the Daily Kos as a "wholly manufactured crisis with just one objective: to give Donald Trump the excuse to seize power with the aid of compliant Republicans."

"The president was frustrated. He was at odds with Congress. The regular workings of government didn't let him do what he desperately wanted to do. So he went on national television to explain why a public policy impasse amounted to a national emergency allowing him to take extraordinary action.

"'My fellow Americans, tonight our country faces a grave danger,' President Harry S. Truman said from the White House on the night of April 8, 1952. 'These are not normal times. These are times of crisis.'

"Truman went on to explain why he had just directed his secretary of commerce to seize control of the country's steel mills. An ongoing dispute between the companies and their workers threatened to deny U.S. troops the weapons and tanks they needed to fight in the Korean conflict.

"'I would not be faithful to my responsibilities as president if I did not use every effort to keep this from happening,' he argued."

Related Topic(s): Border Dispute; Congress; Government; Immigrants; Policy, Add Tags
Add to My Group(s)
Go To Commenting
The views expressed herein are the sole responsibility of the author and do not necessarily reflect those of this website or its editors.