Bernie Sanders has proposed a Marshall Plan for the islands, instead of an inhumane and antidemocratic oversight board. 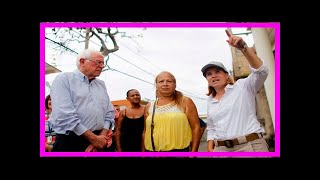 Thousands of Puerto Ricans marched on May Day to protest the brutal austerity agenda that has been imposed on the commonwealth by an unelected and unaccountable federal oversight board.

Established in 2016 after enthusiastic lobbying by House Speaker Paul Ryan and his cronies on Wall Street and in Washington, the Financial Oversight and Management Board for Puerto Rico was designed to address a debt crisis by overruling local democracy. And it is doing just that. This month, the board moved to cut pensions that sustain families across the islands, which were ravaged by hurricanes and tropical storms in 2017; to force the consolidation of agencies that are essential to rebuilding Puerto Rico; to reduce sick leave and vacation pay for the public workers who struggled to maintain civil society; to slash aid to Puerto Rico's 78 municipalities; and to cut funding for its largest public university.

The board's interventions and proclamations were described in a recent Bloomberg Markets report as "buttressing the optimism among investors that they stand to recover more on the bankrupt island's [sic] debt than they previously expected." But they have proven to be exceptionally unpopular with Puerto Rico's elected leaders and the massive crowds that took to the streets on May Day. And rightly so. As a dissenting board member, Ana Matosantos, explained when the mid-April vote was taken: "I am simply not willing to support massive cuts to the safety net. I cannot support too much pain with too little promise."

Gerardo Portela, the executive director of elected Governor Ricardo Rosselló's fiscal agency, was blunter, arguing that the board's assault on the islands, which have suffered not merely from hurricane hits but from an 11-year-long recession, was "inhumane."

Inhumane, and strikingly antidemocratic -- as the appointed board members (who were recommended by Ryan and his fellow congressional leaders) are shaping Puerto Rico's fiscal policies without taking direction from the voters of Puerto Rico.

Related Topic(s): Austerity; Bernie Sanders; Brutality; Legislation; Medicaid; Medicare; Protest; Puerto Rico Devastation, Add Tags
Add to My Group(s)
Go To Commenting
The views expressed herein are the sole responsibility of the author and do not necessarily reflect those of this website or its editors.