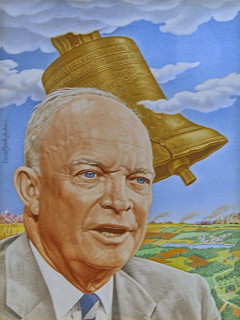 "This conjunction of an immense military establishment and a large arms industry is new in the American experience. The total influence -- economic, political, even spiritual -- is felt in every city, every statehouse, every office of the federal government. We recognize the imperative need for this development. Yet we must not fail to comprehend its grave implications. Our toil, resources and livelihood are all involved; so is the very structure of our society. In the councils of government, we must guard against the acquisition of unwarranted influence, whether sought or unsought, by the military-industrial complex. The potential for the disastrous rise of misplaced power exists, and will persist. We must never let the weight of this combination endanger our liberties or democratic processes. We should take nothing for granted. Only an alert and knowledgeable citizenry can compel the proper meshing of the huge industrial and military machinery of defense with our peaceful methods and goals so that security and liberty may prosper together." -- President Dwight D. Eisenhower

Dwight D. Eisenhower was a five-star general in charge of the Normandy Invasion and a popular two-term President of the United States. Today he would be called a "conspiracy theorist."

Were Ike to be issuing his warning from the White House today, conservative Republicans like Senators Lindsey Graham (R-SC) and Marco Rubio (R-FL) would be screaming at Ike for impugning the motives of "the patriotic industry that protects our freedom."

Neoconservatives such as William Kristol would be demanding to know why President Eisenhower was issuing warnings about our own military-industrial complex instead of warning about the threat presented by the Soviet military.

The presstitute media would be implying that Ike was going a bit senile in his old age, a tactic the presstitutes used against President Reagan as he struggled to end stagflation and the Cold War.

By January 17, 1961, when Eisenhower issued his warning in his farewell address to the American People, it was already too late. Cold Warriors had had their hooks into the American taxpayer for 15 years after the end of WW II, and the military-industrial complex had replaced "mom and apple pie" as the most venerated and entrenched US interest. The Dulles brothers ran the State Department and CIA and overthrew governments at will. (Read The Brothers)

The military-industrial complex had learned that regardless of the protestations of high-ranking military officers, no cost-overrun, no matter how egregious, went unpaid. Armaments industries and military bases were spread all over the country and were important considerations for every senator and many congressional districts. The chairmen of House and Senate military appropriations subcommittees and armed services committees were already dependent on campaign contributions from the military-industrial complex and for cushy jobs should they lose an election.

The Cold War was a profitable business that served many, and that is why it lasted so long.

There was never any threat of the Red Army invading Europe. Stalin declared "socialism in one country" and purged the Communist Party of the Trotskyist element that preached world revolution. An accommodation could have been reached, except that for the first time ever, the military-industrial complex saw that it could keep the war business going for decades and perhaps forever.

George F. Kennan predicted that should the Soviet Union "sink tomorrow under the waters of the ocean," another adversary would have to be invented. "Anything else would be an unacceptable shock to the American economy."

When the Soviet Union collapsed in 1991, the "Soviet threat" was replaced with the "Muslim threat" and the "War on Terror" took over from the Cold War. Despite a succession of false flag attacks and warnings of a "30 years war," a few thousand lightly armed jihadists were an insufficient replacement for the Soviet Union and its thousands of nuclear ICBMs. It was an uncomfortable notion that the "world's only superpower" could not dispose of a few terrorists.

So we are back to the Cold War with Russia. The propaganda is fast and furious. "Putin is the new Hitler." "Russia invaded Ukraine." "Russia is about to invade the Baltics and Poland." "Putin is a corrupt multi-billionaire." "Putin is scheming to recreate the Soviet Union." These accusations become headlines despite US military spending being a dozen or more times higher than Russian military spending and the Russian government expressing no hegemonic aspirations.

Eisenhower's successor, John F. Kennedy, realized that the military-security complex was a threat, but he underestimated the threat and paid for it with his life when he stood up to the military-security complex. In stating this fact I have joined Eisenhower as a conspiracy theorist. (For a hair-raising account of the threat posed to President Kennedy by General Lyman Lemnitzer, Chairman of the Joint Chiefs of Staff, read chapter three in Richard Cottrell's book, Gladio, NATO's Dagger at the Heart of Europe.)

Conspiracies are real. There are many more of them than people are aware. Many government conspiracies are heavily documented by governments themselves with the official records demonstrating the conspiracies openly available to the public. Just google, for example, Operation Gladio or the Northwoods Project. These conspiracies alone are sufficient to chastise those uninformed Western peoples who go around saying, "our government would never kill its own people."

Perhaps Russian studies provided my introduction to government conspiracies against their own people. I learned that the Tsar's secret police set off bombs and killed people in order to blame and arrest labor agitators. I was skeptical of this account and wondered if it was a reflection of left-wing bias against Tsarist Russia. Some years later I asked my colleague, Robert Conquest, at the Hoover Institution at Stanford University if the account was true. He replied that the story is true as is known from the released secret police files that are part of the Hoover Institution's archives.

False flag attacks are used by governments in order to pursue secret agendas that they cannot publicly acknowledge. If President George W. Bush and Vice President Dick Cheney had said: "We are going to attack Iraq and a half dozen other countries in order to exercise hegemony over the Middle East, steal their oil, and clear the path for Israel to steal the entirety of the West Bank of Palestine, diverting taxpayers' resources from serving the American people into the pockets of the armaments industries and spilling the blood of your parents, spouses, children, and siblings, even the American sheeple would have resisted.

Related Topic(s): Conspiracies; Neocons; Presstitutes; Truth, Add Tags
Add to My Group(s)
Go To Commenting
The views expressed herein are the sole responsibility of the author and do not necessarily reflect those of this website or its editors.