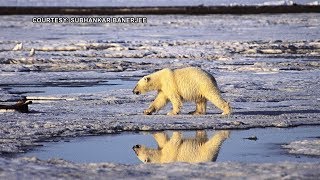 Earlier this month, the U.S. Department of the Interior released its final environmental impact study on plans to drill for oil and gas in the Arctic National Wildlife Refuge (ANWR). While the study noted environmental risks, it gave the go-ahead for drilling in this incredibly sensitive area.

This summer, my small town of Kanab, Utah, agreed to sell water to a frac sand mine and processing plant that would be operating just over 10 miles from Zion National Park. The county planning commission also approved a conditional use permit that would allow the mine to go forward.

What both of these actions have in common is that they are gratuitous acts of environmental destruction. This is not a story of tough trade-offs between the environment and the economy.

Those do exist in the world. It would be great for the environment to cut our fossil fuel consumption by 50 percent tomorrow, but that would devastate the economy, costing many jobs. But neither drilling in the ANWR nor frac sand mining near Zion will provide any great benefit to the economy. Nor would we suffer much, if any, negative economic impact by stopping these plans. They damage treasured landscapes for no good reason.

In the case of the ANWR, the area targeted by the oil and gas industry is one of the most pristine places on the planet. Millions of caribou migrate over the terrain every year. The area is home to grizzly bears, polar bears, the arctic fox and many other rare animals. It is very sensitive terrain, with extreme temperatures. Damage from an oil spill could last for hundreds or even thousands of years.

The economic benefits of allowing drilling in this area are trivial. At best, it will be a drop in the bucket for the world's supply of oil. The George W. Bush administration tried to push drilling in the Refuge through Congress in the middle of the 2001 recession, with claims that it would lead to up 750,000 jobs.

A more serious analysis showed that, even accepting the methodology used by drilling proponents, a more plausible figure would be in the neighborhood of 50,000 jobs. This is just over 0.03 percent of total employment or approximately equal to the number of jobs generated in a typical week.

Similarly, the proposed frac sand mine near Zion will at best add a trivial number of jobs in the industry. Similar mines in Wisconsin employ on average 35 workers at a time.

In addition, frac sand is not a commodity in short supply. Industry analysts all complain about a glut in the industry, with the existing mines barely able to cover operating costs at current prices. This leaves them little prospect of recovering their capital expenditures in building a plant, which can be in the neighborhood of $75 million.

For a project of dubious profitability and questionable need (even if we accept that fracking is good), local politicians are prepared to jeopardize the extraordinary terrain on the outskirts of Zion. The mining claims of the frac sand company Southern Red Sands border the rims of Peekaboo Slot Canyon, Diana's Throne and Best Friends Animal Sanctuary.

In fact, in the case of the frac sand mine, the economics almost certainly go the other way. The economy of the immediate area is almost entirely dependent on tourism and an influx of retirees who come for the area's natural beauty. Both sources of income will almost certainly take a huge hit with a sand frac mine operating just above Kanab.

In both cases, what we are seeing is gratuitous destruction of environmental treasures, with people in power taking actions that show they don't give a damn about the world they pass on to future generations.

Clearly, there are companies that expect to profit from this degradation of the environment, but they are not the driving force here. There just is not that much money at stake. Rather, people in power are spitting in the face of people who value the environment to show they can wreak destruction for no good reason whatsoever.

Dr. Dean Baker is a macroeconomist and Co-Director of the Center for Economic and Policy Research in Washington, D.C. He previously worked as a senior economist at the Economic Policy Institute and an assistant professor at Bucknell University. (more...)
Related Topic(s): ANWR; Arctic Drilling; Arctic National Wildlife Refuge; Economic Prejudice; Jobs; Oil; Wildlife, Add Tags
Add to My Group(s)
Go To Commenting
The views expressed herein are the sole responsibility of the author and do not necessarily reflect those of this website or its editors.