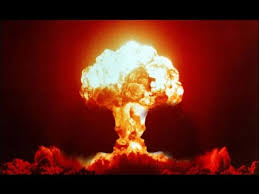 The first nuclear explosion in recorded history, July 16, 1945.
(Image by US Department of Energy)   Details   DMCA

A mindset that is popular today as it was in ancient times is that there is nothing that is really new. It's always the same old same old. This ideas was expressed by the Greek and Roman philosophers and it is found in the Hebrew Bible/Old Testament at Ecclesiastes 1:9, which states in part, "there is no new thing under the sun."

Embracing this mindset after July 16, 1945, could lead to humanity destroying itself. On July 16, 1945, the very first atomic bomb in recorded history was detonated. This was something new under the sun that could literally destroy life on our beautiful and wonderful planet earth. (Personally, I believe we should stop using Before Christ/BC and In the Year of our Lord/ AD to denote time and start using Before Nuclear Age/BNA and Nuclear Age/NA. This would help our thoughts to be more centered on reality.)

The development of nuclear weapons was a fundamental change in our environment. Nature, which we are all a part of, is uncompromising. In Nature, living things either evolve or they die.

A misconception about evolution is that only the strongest survive. In reality, the ones that survive are the ones that adapt to their often-changing environment. On July 16, 1945 the environment for all of humanity, and for all of our world and for all life on it, changed. On that day, when the very first atomic bomb was detonated during a test in the Jornada del Muerto desert in New Mexico, our reality changed but our thinking did not. By building more and more nuclear bombs, each one more powerful and destructive than the previous one, humanity, for the first time in recorded history, has the power to destroy itself along with all life on earth.

Acquiring the deadly and destructive power of nuclear weapons made it imperative for humanity to evolve and adapt its thinking. Our thoughts are what determine our actions. Deism, by always promoting our God-given gift of reason, helps people to be more thoughtful and to apply innate God-given reason to every aspect of their lives. On an individual level, this can help people in many ways, including helping them from getting into fights with one another. On a worldwide level, this can help nations avoid going to war with each other. Wars, which in the nuclear age we are now in could literally destroy all life on our beautiful planet earth.

Currently nine nations are known to have nuclear bombs and missiles. They are the United States, Russia, Communist China, France, England, Communist North Korea, Israel, India and Pakistan. The last three nuclear nations on the list, Israel, India and Pakistan, are all religious-based nations. Religions all have and promote irrational ideas and beliefs. Some of these irrational beliefs involve the promotion of religious violence. True believers in the religious superstitions who believe their particular "holy" book is the true Word of God, and that their "holy" book promotes religious violence, are a very real threat to other people. When they are in powerful positions in religious-based governments that have access to nuclear weapons, they are a very real danger to the entire planet. It's very feasible that such a person, or persons, could launch a nuclear war sincerely believing they are doing the will of God, based on the perverted and ungodly way the Creator is portrayed in their "holy" book and religion. It's these deeply ingrained religious beliefs infecting the minds of true religious believers that probably prompted the Deist George Washington to write, "Of all the animosities which have existed among mankind, those which are caused by difference of sentiments in religion appear to be the most inveterate and distressing, and ought most to be deprecated."

In 1956 Albert Einstein, who held Deistic beliefs about God, warned us about the necessity for our survival in the nuclear age of developing a new way of thinking. Einstein wrote:

Deism, which is belief in God based on reason and Nature, can be an important part of the new way of thinking Einstein said we need for our survival in the nuclear age. The spread of Deistic ideas, which is already starting to happen, and which is happening in Turkey to the point of government and Muslim leaders warning people against Deism, can render the "revealed" religions harmless. This won't solve all of the world's problems, but it will solve a large portion of them, which includes the three religious nations that are in possession of nuclear weapons.

Bob Johnson is a paralegal and a freelance writer in Florida. He was raised Roman Catholic, but after reading Thomas Paine's The Age of Reason, he became a Deist. In 1993 he founded the World Union of Deists and in 1996 he launched the first web (more...)
Related Topic(s): Change; Environment; History; Nuclear; Thinking, Add Tags
Add to My Group(s)
Go To Commenting
The views expressed herein are the sole responsibility of the author and do not necessarily reflect those of this website or its editors.