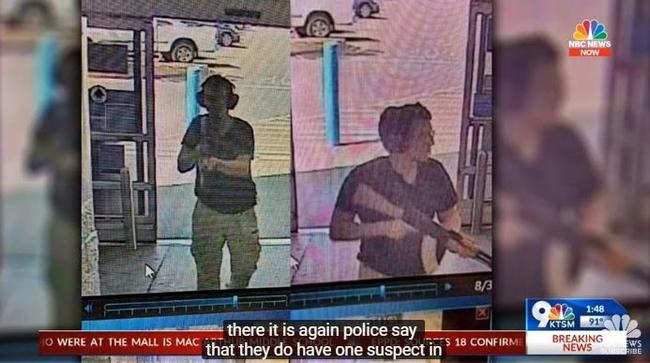 There has been another mass shooting in America in under a week.

Earlier today, a 21-year-old gunman from the Allen, Texas(identified but who shall remain nameless) killed 18 when he opened fire at an El Paso, Texas Walmart, part of the Cielo Vista Mall, south of El Paso international airport.

Last Sunday, a gunman killed three and injured 13 at the Gilroy Garlic Festival in California.

The El Paso shooter's social media accounts suggest he was an avowed Donald Trump supporter who advocated a wall along the Southern border.

Although law enforcement has not yet confirmed this, a racist manifesto is supposedly also circulating via social media.

"So law enforcement does believe that this is his manifesto. They haven't confirmed it, but they believe it is his. It was posted on 8chan-which is an extremist website- hours before the shooting. It was deleted shortly after the shooting happened. It's a wildly anti-immigrant manifesto."

"It's three pages of hatred against immigrants and people, you know, view it basically as invaders to the United States where they believe-and people generally on this extremist forum where these people get radicalized-believe that there is only so much space or only so many jobs in this country and it's being replaced by Mexican immigrants, and in his case, he also believed in automation. So it is a racist and anti-immigrant manifesto that was posted on a site known exclusively for that. And by the way, this is not the first time this has happened. The Christchurch shooter,who killed 49 people, posted his manifesto on the same website. 4Chan, which is like a sister site to 8chan, a month after that Christchurch shooting, there was a manifesto posted by the synagogue shooter. And last week the Gilroy shooter , he told people to read a manifesto that has been posted to 4Chan literally a hundred times, it's from the 1890s and I'm not sure he came about that in a library."

According to The Southern Poverty Law Center (SPLC), white supremacist violence and overt bias have surged the past two years over fears of immigration and the nation's shifting cultural landscape.

According to Genocide Watch:

"All cultures have categories to distinguish people into 'us and them' by ethnicity, race, religion, or nationality: German and Jew, Hutu and Tutsi. Bipolar societies that lack mixed categories, such as Rwanda and Burundi, are the most likely to have genocide."

Donald Trump built his campaign, and now his presidency, on those "rapists ," "murderers," and "animals" "invading" our country from the Southern border.

He accused Haitian immigrants residing here under temporary protected status as having AIDS.

Related Topic(s): Assault; Gunman; Mass Shooting; Shooter; Trump; Violence; WalMart; Weapons, Add Tags
Add to My Group(s)
Go To Commenting
The views expressed herein are the sole responsibility of the author and do not necessarily reflect those of this website or its editors.