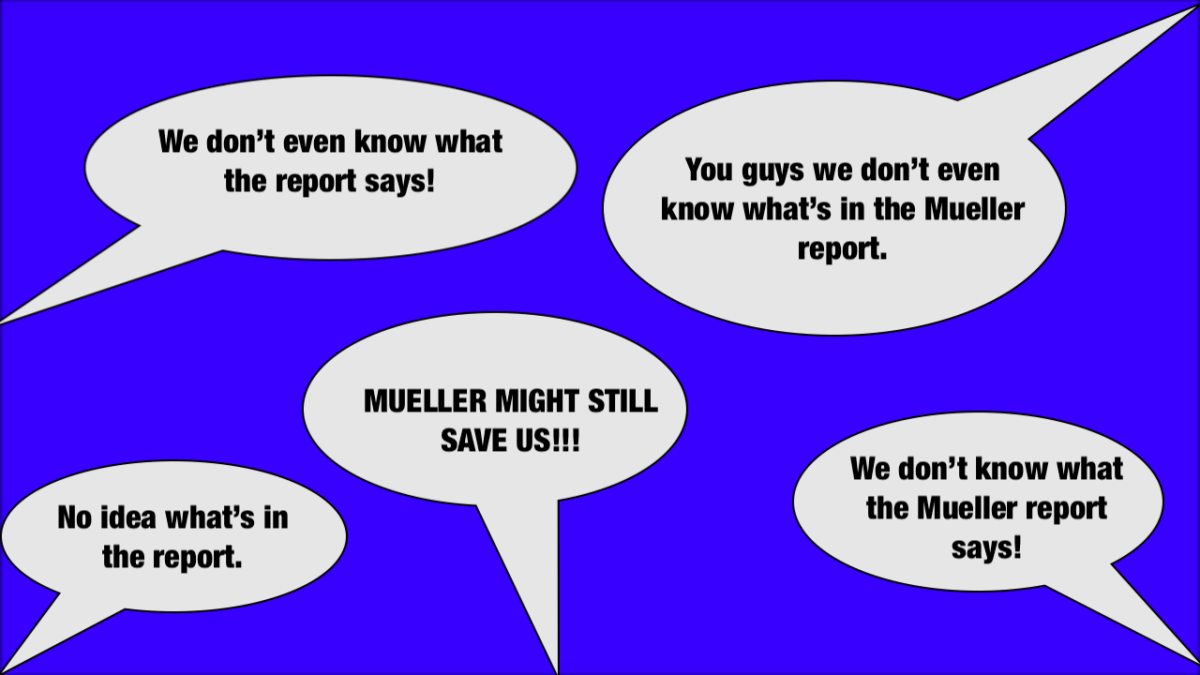 Well it certainly hasn't taken long for the establishment narrative control machine to pace Russiagaters into a new arsenal of talking points. Now if you try to speak online about how Attorney General William Barr's letter says that the Mueller report contains the explicit phrase "[T]he investigation did not establish that members of the Trump Campaign conspired or coordinated with the Russian government in its election interference activities," or mainstream media reports that there are no sealed indictments and that no new indictments have been recommended, you'll be inundated with comments telling you "We don't know what's in the report! You don't know! No one knows!"

"Mueller reported Trump did not collude with Russia to influence our elections," Hawaii Representative Tulsi Gabbard stated on Twitter yesterday. "Now we must put aside partisan interests, move forward, and work to unite our country to deal with the serious challenges we face."

Peruse the comments on Gabbard's post and you'll see some 20 thousand furious responses all more or less saying the same thing: we don't know what Mueller reported. It's a complete and total mystery. There could be anything in there. For all we know Barr lied about the whole thing.

"Mueller has not reported anything," tweeted journalist Soledad O'Brien to thousands of likes and retweets in response to Gabbard's post. "Why does anyone support this idiotic lady?"

Mueller has not reported anything. Why does anyone support this idiotic lady? https://t.co/FTHQEzSvOr

This lays out clearly where the victims of the Russiagate psyop are being herded in response to Mueller's report. A few days ago when I would talk on social media about the fact that Don Jr and Jared Kushner aren't being dragged off in chains as promised, there was deathly silence from the Russia-gate crew. Now when I talk about it (check out the responses to this post just for an example), I get a bunch of responders going on about the fact that we haven't seen the report, and that Barr's letter only contains partial sentences from the report (as though there's anything else that could be in those sentences which would change the meaning of "did not establish that members of the Trump Campaign conspired or coordinated with the Russian government in its election interference activities"). These are the arguments that the narrative managers have taught them to make.

Of course, these arguments are absurd. As other analysts have noted repeatedly, the belief that the full Mueller report contains shocking and incriminating evidence of Russian collusion is premised on the idea that Robert Mueller, the paragon of virtue and integrity according to these same people, is simply sitting on the sidelines allowing William Barr to lie about his investigation uncorrected. Mueller, who had no hesitation in coming out to correct BuzzFeed's false reporting about a single aspect of the investigation in January, has not stepped forward to say that Barr has lied about his entire two-year investigation as they are claiming. There has not been so much as a single anonymous leak from anyone on his team to the Washington Post contradicting anything Barr's said.

Mueller made it clear with the BuzzFeed debacle that he will intervene to prevent disinformation about his investigation from tainting public discourse, but he has not done so with Barr's letter, even after the investigation is over. This fact kills the argument that there might be some dramatic revelations about a Russian conspiracy in the report.

Luckily for us all, this idiotic argument won't last long. Barr now says that the Justice Department will be making the report available to the public by "mid-April, if not sooner," and that "there are no plans to submit the report to the White House for a privilege review."

Which of course means that by mid-April, if not sooner, Russia-gaters will be subjected to yet another loud "told you so" victory lap from Russia-gate skeptics like myself. And they will have brought it entirely upon themselves.

On the last-gasp conspiracy theory of the collusion dead-enders to keep the flock hooked: that William Barr is materially misrepresenting the Mueller report & Mueller and his entire team are just remaining quiet & not objecting about this wholesale distortion of their work: pic.twitter.com/ESq8Dw4nr1

The phrase deus ex machina comes from a common plot resolution technique in ancient Greek theater in which an actor playing a god (deus) was lowered onto the stage by a pulley system (machina) at the end of the play to save the day. The god would swoop in, rescue the heroes, mete out punishment to the villains, and deliver a monologue saying everything's fine now.

Related Topic(s): Conspiracy; Corruption; Democrats; Impeachment; Mueller Investigation; Russiagate, Add Tags
Add to My Group(s)
Go To Commenting
The views expressed herein are the sole responsibility of the author and do not necessarily reflect those of this website or its editors.