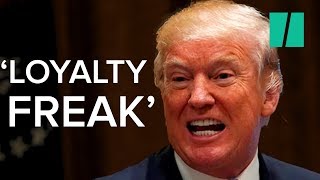 Yesterday President Donald Trump tweeted, "My thoughts and prayers are with the families of our serviceman who was killed and his fellow servicemen who were wounded in Somolia. They are truly all HEROES." Three hours later he tweeted it again, this time with the correct spelling of Somalia.

A few days earlier, at the climax of his phony, insipid feud with the Philadelphia Eagles, Donald Trump lectured Americans that they must always stand for the national anthem.

"We stand to honor our military and to honor our country, and to remember the fallen heroes who never made it back home," the reality TV president bloviated. "We stand to show our love for our fellow citizens and our magnificent Constitution. We stand to pay tribute to the incredible Americans who came before us and the heroic sacrifices they made."

In both of these statements, President Trump was lying.

My thoughts and prayers are with the families of our serviceman who was killed and his fellow servicemen who were wounded in Somalia. They are truly all HEROES.

The US special operations soldier who was killed in Somalia (one of the "seven countries in five years" famously named in General Wesley Clark's revelation of the US war machine's plans for world domination) and the four others who were injured are not heroes. The US servicemen and women who have fought and died in America's nonstop acts of military expansionism and wars of aggression are not heroes. They are victims. They are victims of a sociopathic power establishment which does not care about them, and never has.

If what I just wrote bothered you, it is because you have been conditioned to oppose such ideas by generations of war propaganda. If you believe that US soldiers are heroes, it means that you believe that they are fighting and dying for a noble cause; for your freedom, for democracy, for the good and the just. It turns the deaths of the fallen into a tragic but noble sacrifice in your eyes, which keeps you from realizing that they have actually been dying for the profit margins of war plutocrats, land and resource assets, and the neoconservative agenda to secure control of the planet.

There is nothing heroic about being thrown into the gears of the war machine and having one's body and mind ripped apart for the advancement of plutocratic interests. But if your rulers can trick you into thinking that dead US soldiers died for something worth dying for, you won't turn around and lay the blame on the war profiteers and ambitious sociopaths who are truly responsible for their deaths.

Related Topic(s): Death; Families; Heroes; Patriotism; Terrorism; Wars, Add Tags
Add to My Group(s)
Go To Commenting
The views expressed herein are the sole responsibility of the author and do not necessarily reflect those of this website or its editors.