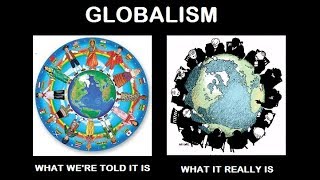 These words -- Socialism and Globalism -- are a mystery to most people. What do they mean? Why do they matter?

They matter because, behind the mask, they indicate massive centralized power at the top of the food chain. They aren't "movements on behalf of the people." They aren't "humanitarian solutions to our problems."

The massive power I refer to consists of governments, mega-corporations, banks, foundations, and technocrats working together, colluding, cooperating, planning a future of control over the world population.

Before he was killed in the shoot-down of Korean Airlines Flight 007 (1983), Congressman Larry McDonald stated: "The drive of the Rockefellers and their allies is to create a one-world government combining super-capitalism and Communism under the same tent, all under their control... Do I mean conspiracy? Yes, I do. I am convinced there is such a plot, international in scope, generations old in planning, and incredibly evil in intent."

Rep. Louis T. McFadden, Congressional Record, 72nd Congress, 1st session, June 10, 1932; McFadden served as Chairman of the United States House Committee on Banking and Currency: "Mr. Chairman, when the Federal Reserve Act was passed the people of the United States did not perceive that a world system was being set up here which would make the savings of an American school-teacher available to a narcotic-drug vendor in Macao. They did not perceive that the United States was to be lowered to the position of a coolie country which has nothing but raw materials and heavy goods for export. That Russia was destined to supply manpower and that this country was to supply financial power to an international superstate -- a superstate controlled by International bankers and international industrialists acting together to enslave the world for their own pleasure."

THAT is Socialism/Globalism. It isn't a revolution by and for "the downtrodden."

To get a flavor of what would happen to the United States under such a system, read on:

SCENE: COURTROOM OF THE FUTURE

THE ROOM IS EMPTY, EXCEPT FOR THE PROSECUTOR AND THE JUDGE.

Prosecutor: Your Honor, is there a representative of America here today?

Judge: No need to look for one. We can proceed.

Prosecutor: Very well. I wish to say that the country known as America was always a fiction.

Prosecutor: Because borders are artificial and arbitrary.

Related Topic(s): America; Capitalism; Freedom; Globalism; World Issues, Add Tags
Add to My Group(s)
Go To Commenting
The views expressed herein are the sole responsibility of the author and do not necessarily reflect those of this website or its editors.