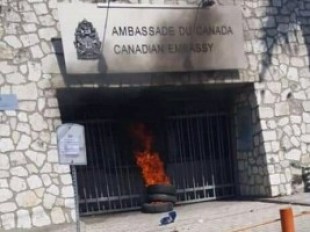 Echoing the protesters immediate demand for Jovenel Moïse to go, an open letter was released last Tuesday calling on Justin Trudeau's government to stop propping up the repressive and corrupt Haitian president.

Something you can't name is very difficult to talk about. Canada's role in Haiti is a perfect example. Even when the dominant media and mainstream politicians mention the remarkable ongoing revolt or protesters targeting Canada, they fall on their faces in explaining it.

Not one journalist or politician has spoken this truth, easily verified by all sorts of evidence: "Sixteen years ago Ottawa initiated an effort to overthrow Haiti's elected government and has directly shaped the country's politics since. Many Haitians are unhappy about the subversion of their sovereignty, undermining of their democracy and resulting impoverishment."

While a number of left media ran the letter, major news outlets failed to publish or report on it. Interestingly, reporters at La Presse, Radio Canada and Le Devoir all expressed interest in covering it but then failed to follow through. A Le Devoir editor's reaction was particularly shameful since the leftish, highbrow, paper regularly publishes these types of letters. The editor I communicated with said she'd probably run it and when I called back three days later to ask where things were at, she said the format was difficult. When I mentioned its added relevance after protesters attempted to burn the Canadian embassy, which she was aware of, she recommitted to publishing it. Le Devoir did not publish the letter when it was submitted to them, although an article published in their paper two weeks later did mention it.

My impression from interacting with the media on the issue is that they knew the letter deserved attention, particularly the media in Que'bec that cover Haiti. But, there was discomfort because the letter focused on Canada's negative role. (The letter is actually quite mild, not even mentioning the 2004 coup, militarization after the earthquake, etc.)

On Thursday Que'bec's National Assembly unanimously endorsed a motion put forward by Liberal party foreign affairs critic, Paule Robitaille, declaring "our unreserved solidarity with the Haitian people and their desire to find a stable and secure society." It urges "support for any peaceful and democratic exit from the crisis coming from Haitian civil society actors."

In March Que'bec Solidaire's international affairs critic Catherine Dorion released a slightly better statement "in solidarity with the Haitian people". While the left party's release was a positive step, it also ignored Canada's diplomatic, financial and policing support to Moise (not to mention Canada's role in the 2004 coup or Moise's rise to power). Que'bec Solidaire deputies refused to sign the open letter calling on "the Canadian government to stop backing a corrupt, repressive and illegitimate Haitian president."

Even when media mention protests against Canada, they can't give a coherent explanation for why they would target the great White North. On Wednesday Radio Canada began a TV clip on the uprising in Haiti by mentioning the targeting of the Canadian embassy and with the image of a protester holding a sign saying: "f*ck USA. Merde la France. f*ck Canada." The eight-minute interview with Haiti based Que'bec reporter Etienne Côte'-Paluck went downhill from there. As Jean Saint-Vil responded angrily on Facebook, these three countries are not targeted "because of the 'humanitarian aid' that the 'benevolent self-proclaimed friends of Haiti' bring to the 'young democracy in difficulty'. This is only racist, paternalistic and imperialist propaganda! They say 'f*ck Canada', 'sh*t France', 'f*ck USA"' because they are not blind, dumb or idiots."

A few days earlier Radio Canada's Luc Chartrand also mentioned that Canada, France and the US were targeted by protesters when he recently traveled to Haiti. While mentioning those three countries together is an implicit reference to the 2004 coup triumvirate, the interview focused on how it was because they were major donors to Haiti. Yet seconds before Chartrand talked about protesters targeting the Canada-France-US "aid donors" he mentioned a multi-billion dollar Venezuelan aid program (accountability for corruption in the subsidized Venezuelan oil program is an important demand of protesters). So, if they are angry with "aid donors" why aren't Haitians protesters targeting Venezuela?

Chartrand knows better. Solidarite' Que'bec-Haiti founder Marie Dimanche and I met him before he left for Haiti and I sent Chartrand two critical pieces of information chosen specifically because they couldn't be dismissed as coming from a radical and are irreconcilable with the 'benevolent Canada' silliness pushed by the dominant media. I emailed him a March 15, 2003, L'actualite' story by prominent Que'bec journalist Michel Vastel titled "Haïti mise en tutelle par l'ONU ? Il faut renverser Aristide. Et ce n'est pas l'opposition haïtienne qui le re'clame, mais une coalition de pays rassemble'e à l'initiative du Canada!" (Haiti under UN trusteeship? We must overthrow Aristide. And it is not the Haitian opposition calling for it, but a coalition of countries gathered at the initiative of Canada!)

Vastel's article was about a meeting to discuss Haiti's future that Jean Chretien's government hosted on January 31 and February 1 2003. No Haitian representative was invited to the meeting where high level U.S., Canadian and French officials discussed overthrowing elected president Jean-Bertrand Aristide, putting the country under international trusteeship and resurrecting Haiti's dreaded military. Thirteen months after the Ottawa Initiative meeting, US, French and Canadian troops pushed Aristide out and a quasi-UN trusteeship had begun. The Haitian police were subsequently militarized.

The second piece of information I sent Chartrand was the Canadian Press' revelation (confirmation) that after the deadly 2010 earthquake, Canadian officials continued their inhumane and antidemocratic course. According to internal government documents the Canadian Press examined a year after the disaster, officials in Ottawa feared a post-earthquake power vacuum could lead to a "popular uprising." One briefing note marked "secret" explained: "Political fragility has increased the risks of a popular uprising, and has fed the rumour that ex-president Jean-Bertrand Aristide, currently in exile in South Africa, wants to organize a return to power." The documents also explained the importance of strengthening the Haitian authorities' ability "to contain the risks of a popular uprising."

To police Haiti's traumatized and suffering population 2,050 Canadian troops were deployed alongside 12,000 U.S. soldiers and 1,500 UN troops (8,000 UN soldiers were already there). Even though there was no war, for a period there were more foreign troops in Haiti per square kilometer than in Afghanistan or Iraq (and about as many per capita). Though Ottawa rapidly deployed 2,050 troops officials ignored calls to dispatch this country's Heavy Urban Search and Rescue (HUSAR) Teams, which are trained to "locate trapped persons in collapsed structures."