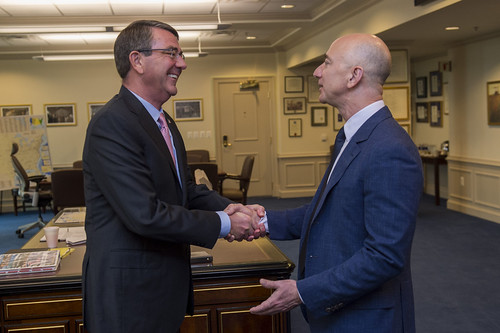 Esper, Bezos and the defense of wealth
(Image by U.S. Secretary of Defense)   Details   DMCA

As the economic and social disaster of the pandemic unfolds, American billionaires are achieving complete domination over society. A June 4 report of the Institute for Policy Studies make this clear. Since March 18, the combined wealth of the 629 U.S. billionaires "surged by $565 billion between March 18 and June 4the same period in which 42.6 million Americans filed jobless claims."

Three billionaires (Bezos, Gates, and Buffett) continue to own as much wealth as the bottom half of all U.S. households. According to an April 23 IPS report, "Between 1990 and 2020, the U.S. billionaire class has seen its net worth increase over 1,130 percent. Meanwhile, U.S. median household net worth between 1989 and 2016 grew by a mere 5.37 percent. Billionaire wealth has grown 210 times faster than median wealth."

This explosion in economic inequality is the result of seven decades of bipartisan tax policy by a succession of neoliberal administrations. According to the New York Times, "The overall tax rate on the richest 400 households last year [in 2018] was only 23 percent... This overall rate was 70 percent in 1950 and 47 percent in 1980." Meanwhile, the taxes of middle-class and poor families have remained flat and the "tax system has become radically less progressive".

While their taxes were declining for the wealthy, incomes were soaring. According to the Economic Policy Institute, average CEO compensation (inflation-adjusted) at the largest 350 corporations rose 940.3% from 1978 to 2018. The annual earnings of upper-level managers and professionals in the top 0.1% grew 339.2% from 1978 to 2017.

This combination of declining tax rates and soaring earnings among the economic elite is a major cause of the increasing number, wealth, and power of billionaires. Most of their lavish income isn't needed for living expenses. It just keeps accumulating in their accounts, generating more wealth through interest, dividends, and growth in the market value of investments. This obscene economic inequality has grown too massive to be remedied by restoring progressive income taxes. A substantial wealth tax is needed to restore democracy by redistributing power across economic classes.

The word 'republic' derives from the Latin 'res publica', literally a public thing. Our Republic has been privatized. A system owned by all citizens with the goal of creating public goods such as security and justice has been appropriated by a sliver of society for the purpose of securing and increasing its wealth. The duopoly--the two major parties--has become totally dependent on the very rich for campaign funding (i.e. for its survival). One party brazenly proclaims its loyalty to wealth. The other disguises this loyalty behind a gauze of token programs for "the working class".

The 8 min. 46 sec. video of the strangulation of George Floyd under the knee of Minneapolis policeman Derek Chauvin let the world stare deeply into the face of evil. Can we ever forget the calm indifference of Chauvin toward the pleas of bystanders and the words "I can't breathe" from the lips of his choking victim? There is a combination of passion and listless gloom in the daily and nightly protests. How can we get rid of this foul and violent thing that has resisted decades of attempted reforms?

Racism is abetted by the inhumanity with which American capitalism treats all workers as commodities in a labor market rather than citizens with equal dignity and rights. Refusing to fund universal health care is one of the many cruelties spawned by this disrespect for people. In 1967 Martin Luther King said, "I will not dwell on the experiences of poverty that derive from racial discrimination, but will discuss the poverty that affects white and Negro alike." Near the end of his life he came to believe that the evil of poverty is not that its rate is higher among blacks than among whites. Instead, it is the very existence of so much poverty among both whites and nonwhites in a society with so much wealth.

The American left is still reeling from the collapse of Bernie Sanders' primary campaign against "the billionaire class". The memory of Sanders' April 13 endorsement of Biden in what looked like a hostage video still makes me queasy. Sanders' great achievement was to demonstrate twice (in 2016 and 2020) the possibility of waging a national campaign for the presidency based on a huge number of small donations and without corporate funding.

What Sanders and his supporters also proved was the impossibility of waging a successful anti-capitalist campaign from within a capitalist party. At a CNN town hall in 2017, a student asked Nancy Pelosi what the Democratic Party would do to inspire young people "who want a more stark contrast to right-wing economics". Her response: "We're capitalists and that's just the way it is." Despite his defeat in 2016, Bernie Sanders ignored this message.

It's time for the left to stop whining about the Democratic Party sticking them again with a "lesser-evil" election, this time between the macho capitalism of a malignant narcissist and the stealth capitalism of a pretend uncle. Let's learn from the two Sanders debacles that the Democratic Party is dead for the left. The left needs to overcome its silo culture. It is fragmented into isolated organizations such as the Green Party, MoveOn, Working Families, Justice Democrats, The Black Progressive Action Coalition, and Democratic Socialists of America, all pursuing related aims in an uncoordinated way.

I have a political dream: these groups hold a convention to form a single national party around core progressive issues such as universal health care, a green economy, and reduction in military expenditures. They agree to share their mailing and donor lists. The Sanders organization will open its list of donors, most of whom would surely be ready to give again for the obvious next step. Bernie's invaluable legacy from 2016 and 2020 is that a small-donor campaign free of corporate corruption is a real possibility, just not inside the Democratic Party