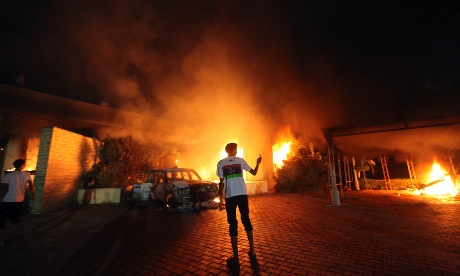 (Image by Unknown Owner)   Details   DMCA
The US Consulate in Benghazi in flames during a protest by an armed group protesting an anti-Islamic film produced in the United States. Photograph: Esam Omran Al-Fetor/Reuters

Protesters attacked the US consulate in Benghazi, Libya on Tuesday night and killed four Americans, including the US ambassador, Chris Stevens. The attacks were triggered by rage over an amateurish and deeply hateful film about Islam that depicted the Prophet Muhammad as, among other things, a child molester advocate, a bloodthirsty goon, a bumbling idiot, and a promiscuous, philandering leech. A 13-minute trailer was uploaded to YouTube and then quickly circulated in the Muslim world, sparking widespread anger (the US embassy in Cairo was also attacked).

The anti-Islam film was written, directed and produced by an Israeli real estate developer living in California, Sam Bacile. He claimed, in an interview with Haaretz, that the film "cost $5m to make and was financed with the help of more than 100 Jewish donors". Its purpose, as described by the Israeli newspaper, was to show that "Islam is a cancer" and to provide a "provocative political statement condemning the religion". It's hard to believe that the film -- which is barely at the level of a poorly rehearsed high-school play -- required $5m to make, but the intent seems clear: to provoke Muslims into exactly the sort of violent rage that we are now witnessing.

Events like this one are difficult to write about when they first happen because the raw emotion they produce often makes rational discussion impossible. A script quickly emerges from which All Decent People must recite, and any deviations are quickly detected and denounced. But given the magnitude of this event and the important points it raises, it is nonetheless worthwhile to examine it:

1) The deaths of Ambassador Stevens, a former Peace Corps volunteer and a dedicated Arabic-speaking career diplomat, and the other three American staff, are both a tragedy and a senseless outrage. Indiscriminately murdering people over a film, no matter how offensive it is, is an unmitigated wrong. The blame lies fully and completely with those who committed these murders.

Related Topic(s): Ambassador; American Foreign Policy; American Quandry Over Libya; Americans Killed; Libya Revolution; Libyan Government; Republican, Add Tags
Add to My Group(s)
Go To Commenting
The views expressed herein are the sole responsibility of the author and do not necessarily reflect those of this website or its editors.