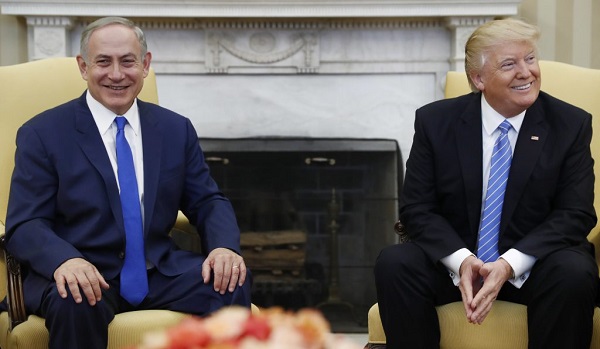 The question for Netanyahu is how much of a concession he seeks to extract from the White House. The answer may depend on whether Trump looks likely to win a second term
(Image by Hamodia.com)   Details   DMCA

Annexation by Israel of occupied Palestinian territory in the West Bank was never likely to happen on July 1, as many observers assumed. The date was not a deadline; it was a window opened by the Israeli government to carry out annexation before US President Donald Trump leaves office.

Unhappily for Israeli Prime Minister Benjamin Netanyahu, that window could slam shut in a matter of months, if current polling trends continue and Trump loses the presidential election in November.

Certainly, the fact that no dramatic move took place last week does not indicate that annexation is off the table. Indeed, following meetings in Israel with US officials last week, Netanyahu's office suggested that a US announcement on annexation could happen within days.

The dithering, according to the Israeli media, reflects divisions inside the US administration - despite the fact that its so-called Middle East "peace plan", published earlier in the year, approved Israel's annexation of as much as a third of Palestinian land in the occupied West Bank.

Jared Kushner, Trump's son-in-law and the architect of that plan, has reportedly been at loggerheads with David Friedman, the US ambassador to Israel, over the timing and scale of annexation.

Both are fervent supporters of the settlements. But while Friedman's circle of intimates is dominated by Netanyahu and settler leaders, Kushner has had to weigh wider pressures. It is Kushner who is fielding anxious calls from Arab and European leaders about annexation.

Trump's attention, meanwhile, is focused on other pressing matters, such as how to stop a dangerous fall in his popularity as the pandemic runs wild with potentially catastrophic consequences for the US economy.

Nonetheless, according to a report at there weekend in the Israeli daily newspaper Haaretz, Netanyahu and Friedman's position may slowly be winning out. Kushner is reportedly less in Trump's favour after recent disagreements on domestic policy matters.

Annexation has already served Netanahu's immediate needs. It was a large carrot that incentivised his voting base to keep turning out in three inconclusive elections over the course of a year. It has distracted from his current corruption trial, as well as from his failure to maintain a grip on the Covid-19 pandemic.

Some have speculated that he may no longer feel the need to go through with annexation. Although backed by many Israelis, it is low on their list of priorities as they grapple with disease and recession.

Nonetheless, Netanyahu would struggle to forego it.

This is in part because he made too much of it - and of his special relationship with Trump - during the election campaigns. He will not be forgiven by many on the right should he fail to capitalise on a once-in-a-lifetime opportunity to grab the title deeds to occupied Palestinian land with US blessing.

Furthermore, Netanyahu's own vanity should not be discounted. This is his chance to take his place in Israel's history books - not as Israel's first prime minister to stand trial while in office, but as the leader who secured recognition of the settlements and killed off any chance of a viable Palestinian state.

The question for Netanyahu is how much of a concession he seeks to extract from the White House. The answer may depend on whether Trump looks likely to win a second term.