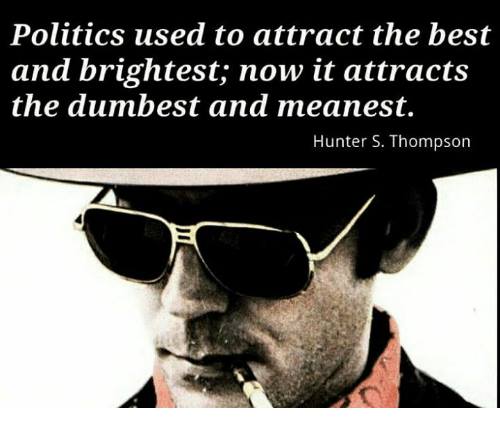 Sometimes you have to just sit back and ask WTF just happened? When I started researching the ins and outs of what passes for the Intel community everybody is so quick to quote these days, I did just that. Two or three times. Maybe four. WTF!

One day, the US government hired a few very dubiously untalented and dangerous characters and they were mixed in with the Intel community. They were the new experts and provided Intel reports to the ODNI. The reports were verified and integrated into a holistic or overarching report called the President's Daily Briefing (PDB).

This single report contains the information the President of the United States determines the possibility of war or peace from.

The next day, the Intel community was mixed in with an overwhelming number of dubious and dangerously uneducated and untrainable characters with scary politics providing cheap political talking points developed by Information Operations professionals.

These characters started out as bit players delivering information that was no better than hearing a rumor and passing it on. Nothing was ever substantial or substantiated. Then as time passed, they became the people that taught today's ABC agency managers and private contractor firms their brand of information gathering, information war, and information operations.

The rumors they were paid so well to develop started making it into the PDB unchecked and unfiltered.

According to the Newsweek article "How Richard Clarke Outsourced Terrorist Intel ," both Steve Emerson and Rita Katz became the go-to companies for OSINT. US intelligence had no experience with it until this period. And US intel and law enforcement didn't want any.

Steve Emerson is famous for claiming Birmingham England is a jihadi Muslim only city. Then Prime Minister Cameron declared Emerson is "obviously a complete idiot!"

His prote'ge' and erstwhile partner Rita Katz was educated in Intel operations while working at a gift shop. No further qualifications were required for this unlikely duo to start providing Intel directly to president Bill Clinton through the PDB. Then they were tasked with training US agency Intel gatherers. I kid you not.

The newest Intel medium pushed onto the Intelligence agencies by the Clintons is called Open Source Intelligence(OSINT). Because of its limitations, OSINT was only supposed to be considered tertiary or at best secondary Intel that had the potential to confirm or deny Human Intel HUMINT (agent's interactions or observations) or SIGINT (electronic signals other than direct communications).

Under the Clintons, OSINT superstars were given preeminence and the future of Intelligence gathering changed forever for the worse. Can it be any clearer why today's Intel managers tried to back Clinton and fabricate crimes against then-candidate and now President Trump?

They owe their industry and careers to the Clintons.

US intelligence agencies training relied on the methods and help of an out of work web-designer, a pornographer suffering from toxic black-mold induced delusions, a gift shop employee, a stay at home dad whose last job was selling underwear, and a man that heard coded intel messages in fax transmission beeps. Unfortunately, this isn't a joke.

One thing all these people have in common is that none of them have a background in intelligence or antiterrorism. In the years before and after 9/11, these concerned citizens took to the web and started pioneering a new form of intelligence called OSINT (Open Source Intelligence). This would later provide the basis for the establishment of the NSA and become the backbone of US intelligence gathering. The Private Contractors Using Vault 7 Tools for US Gov: US Intel Needs a Ground-Up Rebuild Part 1

These heroes deliver unverifiable information to the US government, EU, UK, NATO, and others. The focus and direction of the Intel are provided by their private sector customers. Against all the laws and common sense governing the Intel sector, they and foreign countries lobbying the US Government can now determine what goes into the PDB, raw.