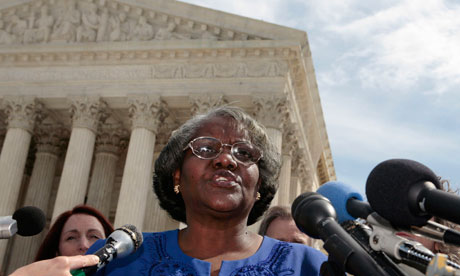 Let's get this right: the world's biggest boss, supported by companies as diverse as Altria, Bank of America, Microsoft and General Electric and backed up by the godfather of big business (the US Chamber of Commerce) has persuaded the US supreme court that thousands of women workers can't possibly share enough of an interest to constitute a class?

It's hard to know which part of the court's decision in Dukes v Walmart hurts equity most: the assault on class-action jurisprudence generally, at a time of shrinking tools for workers seeking redress, or the defeat of history's biggest gender-based claim before a court that, for the first time, includes two women, one of whom (Ruth Bader Ginsburg) made her reputation in sex discrimination law.

Dividing 5-4, in Dukes v Walmart, the supreme court on Monday dismissed the plaintiffs' claim that companywide policy gave local managers too much discretion in pay and promotion decisions, leaving Walmart employees at thousands of Walmart and Sam's Club stores vulnerable to gender stereotypes. (The company changed the format of its name since the case was filed.) The plaintiffs "provide no convincing proof of a companywide discriminatory pay and promotion policy," Justice Antonin Scalia wrote for the majority.

In fact, absent a company-wide memo mandating discrimination, the justices could discern no problematic culture at all. Holding managers' meetings in Hooters? Nope. Referring to women workers as "Janie Qs?" Nah-uh. Paying women less than male workers in every job classification in every region? Explaining, as one plaintiff was told, that Walmart pays men more because "they have families to support?"

Apparently, what the plaintiffs needed to produce for this court was an enormous Walmart yard sign reading "CORPORATE PATRIARCHY TO BE PRACTISED HERE".

"The justices seem to think that gender discrimination is a thing of the past," says Elizabeth Lawrence, one of the attorneys for the plaintiffs. Adding insult to injury, the decision in Dukes comes in the same week that an investigation by the New York Times revealed just how close a personal and professional relationship some justices have with business interests.

The Roberts court has already been hostile to just about every consumer class action. Going forward, the impact of Monday's decision goes well beyond the 1.6 million workers in the Walmart case. "It means it's going to be much harder to bring class action suits against big companies," says Lawrence.

"This is without doubt the most important class-action case in more than a decade," Robin S Conrad, a lawyer with the US Chamber of Commerce told to the press. The Chamber knows just what a win this is. Alongside the Chamber, over twenty corporations, presumably fearing liability for their own behavior, filed amicus briefs on behalf of Walmart.

"This is not an end to this. Instead of a single class action on behalf of workers at 3,400 stores, they're going to face 3,400 suits," said Lawrence. "It's not good for workers, or consumers, or the companies themselves."

But store-by-store claims will require an awful lot of Davids to take on Goliath. Not only the nation's largest private employer, Walmart also has the largest number of employees who receive Medicaid, food stamps and state public assistance. Few workers working alone have the resources and voice to take on an opponent as formidable as the world's largest retail chain in the courts.

Stripped of the class-action tool at a time when companies are growing ever bigger and more powerful -- in the globalized economy, and in politics at home (courtesy of the Supreme Court's Citizens United decision) -- workers are going to have to seek other avenues of collective action for redress of grievances. The United Food and Commercial Workers (UFCW), along with allies across the country, has been working to keep the mega box-store out of urban centres. The UFCW has started a group called Walmart Workers for Change, a workers' centre, and earlier this month, thousands of Walmart workers convened in Bentonville, Arkansas (Walmart's HQ) to announce the Organization United for Respect at Walmart, which will fight for fair workplace standards.

It's not just about the women workers, one participant, Gloria Taylor a Walmart associate in Miami told me when I caught up with her and her colleague Greshiela Green of Los Angeles at the Netroots Nation conference in Minneapolis this weekend. In this interview, Green says she's worked at Walmart for more than three years and she still qualifies for food stamps and welfare -- as do most of her colleagues, as she found out when she set up a page on Facebook.

It's all workers who suffer low wages and hostile treatment from management at Walmart, says Taylor. But so far, she's alone in her store, raising a complaint. Stripped of a collective way to seek justice, and facing a hostile environment for unions, workers like Taylor are more alone today. Returning to work this week after attending the Bentonville meeting, Taylor is braced for repercussions. "I'm the sacrificial lamb. But I don't mind that."

Workers took a hit, but they're not giving up. "Walmart is not too big for justice," says UFCW president Joe Hansen.

Related Topic(s): Politics; Sexism; Supreme Court SCOTUS; WalMart; Women, Add Tags
Add to My Group(s)
Go To Commenting
The views expressed herein are the sole responsibility of the author and do not necessarily reflect those of this website or its editors.