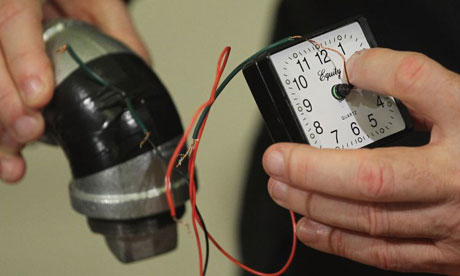 The news stories, which quickly surface, long enough to cause scary headlines, then vanish before people can learn how often the cases are thrown out. These are stories about "bumbling fantasists," hapless druggies, the aimless, even the virtually homeless and mentally ill, and other marginal characters with not the strongest grip on reality, who have been lured into discourses about violence against America only after assiduous courting, and in some cases outright payment, by undercover FBI or police informants.

They have become a litany in recent years. The terrifying 2003-2004 national news stories that a Detroit "sleeper cell" had sent Muslim terrorists to blow up Disneyland and other landmarks, including in Las Vegas, was later thrown out of court, with accusations of prosecutorial misconduct, to almost no press attention -- the same cycle of hype and failed convictions that have characterized many such stories. The evidence had included a home video taken in Disneyland, "doodles," and a guy with a credit card fraud problem, who had been pressured to diminish his own sentence by accusing his buddies.

But the tales of entrapment and terror hype continue apace -- 10 years after 9/11. Judith Miller, in Newsmax, writes that one recent case was so lame that even the FBI distanced itself from NYPD: "Despite FBI Doubts, NYPD Convinced Pipe Bomb Case Posed Real Danger", noted the headline on her 28 November 2011 article. A 27-year-old Dominican immigrant, Jose Pimentel, aka Muhamad Yusuf, had been monitored by NYPD for two years. Last fall, Manhattan District Attorney Cyrus Vance Jr charged Pimentel with constructing pipe bombs to attack "police cars, post offices, veterans of Iraq and Afghanistan, and other targets."

An email in the case, which purports to show that Pimentel was writing about violent jihad to the al-Qaida-supporting "glossy magazine" Inspire, was described to Judith Miller by anonymous "law enforcement officials." Given Miller's journalistic history, this sentence alone should raise eyebrows. But the alleged email is, she writes, "part of a vast investigative file containing over 400 hours of surveillance audio and video tapes, interviews, and other material amassed by the NYPD." New York Police Commissioner Ray Kelly, in a flashy press conference, called the young man a "lone wolf" terrorist -- a recent DHS soundbite. But the case was so shaky that the Federal Bureau of Investigation, as well as federal prosecutors, did not want to join the case: "Too many holes in the case," other anonymous officials told Miller.

Pimentel was one of what has become an army of FBI- or NYPD-entrapped losers. He had no money, no job, and at key points lived with his mom. The New York Times noted that he may have been psychologically "unstable," and that he had made threats after smoking pot. Officials say that in May 2010, he repeated loudly in Arabic that "America is my enemy." This scary guy was a circuit city clerk in Schenectady, New York.

Additional evidence that Miller's anonymous sources give for his being a terrorist? In 2010, he had $100. One witness told police "that he had flashed a $100 bill when he made some purchases." Another? "Pimentel scraped the heads of some 750 matches, officials say." The scenario that entrapped Pimentel involved a surround-sound of informants trying to entrap him in cyberspace and to lure him to incriminate himself in taped phone conversations. But the FBI dropped its involvement after they judged that the informant had been too active in helping: urging or arranging for Pimentel to start drilling into pipe pieces -- the evidence that he intended to set off a bomb.

Many other, much-ballyhooed cases of "homegrown terrorism" show this creaky, effortful, farcical quality of people who, left to their own devices by the FBI or NYPD, would have remained harmlessly playing video games in their childhood bedrooms, smoking their doobies, or babbling gently to themselves, on their anti-psychotic meds, about geopolitical forces.

The "Newburgh Four" is another such case, as Russia Today reported: four African-American Muslims were found guilty recently of a plot to place bombs in two Bronx synagogues and to shoot down military aircraft in Newburgh. Another flashy press conference in May 2009 showcased these four men as "the faces of homegrown terrorism." The FBI had claimed that the men had planned to commit their acts of terrorism on the day that they were arrested. Joseph Demarest from the FBI called it "a terrifying plot."

The men were low-income former convicts who could not read or write with literacy. They could not drive and had no passports. Shahid Hussain, a Pakistani immigrant who was an FBI employee, got them to say they were going to commit these crimes -- paying them $100,000. Hussain presented the men with a fake stinger missile, and Hussain offered these poverty-stricken men cars and money in exchange for their promise to carry out the manufactured plot.

The men's relatives accused the FBI of entrapment. "I do not think this is entrapment. I know it is. This is entrapment," said Alicia McWilliams-McCollum, aunt of 29-year-old David Williams. As with many of these scenarios, one can easily imagine poor people with criminal records, offered large sums of money by a fake jihadist, trying to get the money and then trick the instigator. Also, as any AA or Al-Anon counsellor can tell you, if drugs or alcohol are in the mix, entrapment is a ridiculous premise, too: an addict will say anything, and make any ludicrous promise, to get a giant check. It doesn't mean the addict has any intention of delivering on the supposed contract. David Williams' aunt says that her nephew is in prison because of a pretend terror attack created by the FBI:

"They are creating scenarios; they are manufacturing crimes. That would not have occurred if you had not planted an unconstructive seed into a community."

Attorney Steve Dowds, who tracks cases like the Newburgh Four, argues the US government is systematically employing preemptive prosecution:

"They are taking some down and out vulnerable individuals and not only planting the ideology of jihad on them, giving them all the things they need, all of the material. They are setting up the plan, giving them all the research and then grabbing them and claiming these were homegrown terrorists. It is just a fiction."

Now we have another "underwear bomber" -- declared by the Pentagon to have been about to launch a major attack via a US-bound plane, but who appears, reportedly, to have been a CIA-run double agent. What is the evidence that the "device," which is supposedly so sophisticated that there is doubt as to whether existing surveillance technologies in US airports would have caught it, actually exists? As with so many of these stories, we have no independent verification -- because reporters from the British Daily Telegraph, to Reuters, to the Huffington Post are simply taking dictation from New York Representative Peter King and from the Pentagon, and scarcely asking for backup evidence of their elaborate assertions.

Author, social critic, and political activist Naomi Wolf raises awareness of the pervasive inequities that exist in society and politics. She encourages people to take charge of their lives, voice their concerns and enact change. Wolf's landmark (more...)
Related Topic(s): Orwellian; Pentagon; Terror Alert Distractions; Terror Suspects; Terrorism Terrorist Profiling, Add Tags
Add to My Group(s)
Go To Commenting
The views expressed herein are the sole responsibility of the author and do not necessarily reflect those of this website or its editors.