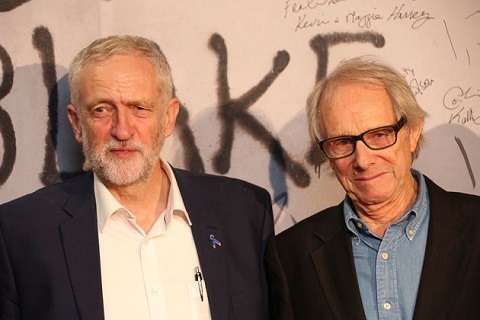 Loach and Corbyn have shared a long history as passionate defenders of Palestinian Rights
(Image by huffpost.com)   Details   DMCA

Ken Loach, one of Britain's most acclaimed film directors, has spent more than a half a century dramatising the plight of the poor and the vulnerable. His films have often depicted the casual indifference or active hostility of the state as it exercises unaccountable power over ordinary people.

Last month Loach found himself plunged into the heart of a pitiless drama that could have come straight from one of his own films. This veteran chronicler of society's ills was forced to stand down as a judge in a school anti-racism competition, falsely accused of racism himself and with no means of redress.

Voice of the powerless

There should be little doubt about Loach's credentials both as an anti-racist and a trenchant supporter of the powerless and the maligned.

In his films he has turned his unflinching gaze on some of the ugliest episodes of British state repression and brutality in Ireland, as well as historical struggles against fascism in other parts of the globe, from Spain to Nicaragua.

But his critical attention has concentrated chiefly on Britain's shameful treatment of its own poor, its minorities and its refugees. In his recent film I, Daniel Blake he examined the callousness of state bureaucracies in implementing austerity policies, while this year's release Sorry We Missed You focused on the precarious lives of a zero-hours workforce compelled to choose between the need to work and responsibility to family.

Inevitably, these scathing studies of British social and political dysfunction exposed even more starkly by the current coronavirus pandemic mean Loach is much less feted at home than he is in the rest of the world, where his films are regularly honoured with awards.

Which may explain why the extraordinary accusations against him of racism or more specifically antisemitism have not been more widely denounced as malicious.

From the moment it was announced in February that Loach and Michael Rosen, a renowned, leftwing children's poet, were to judge an anti-racism art competition for schools, the pair faced a relentless and high-profile campaign of vilification. But given the fact that Rosen is Jewish, Loach took the brunt of the attack.

The organisation behind the award, Show Racism the Red Card, which initially refused to capitulate to the bullying, quickly faced threats to its charitable status as well as its work eradicating racism from football.

In a statement, Loach's production company, Sixteen Films, said Show Racism the Red Card had been the "subject of an aggressive campaign to persuade trade unions, government departments, football clubs and politicians to cease funding or otherwise supporting the charity and its work".

"Pressure behind the scenes" was exerted from the government and from football clubs, which began threatening to sever ties with the charity.

More than 200 prominent figures in sport, academia and the arts came to Loach's defence, noted Sixteen Films, but the charity's "very existence" was soon at stake. Faced with this unremitting onslaught, Loach agreed to step down on March 18.

This had been no ordinary protest, but one organised with ruthless efficiency that quickly gained a highly sympathetic hearing in the corridors of power.

Related Topic(s): Antisemitism; Apartheid; Israel; Jeremy Corbyn; Leader; Media; Palestinian; People; Power; Racism, Add Tags
Add to My Group(s)
Go To Commenting
The views expressed herein are the sole responsibility of the author and do not necessarily reflect those of this website or its editors.