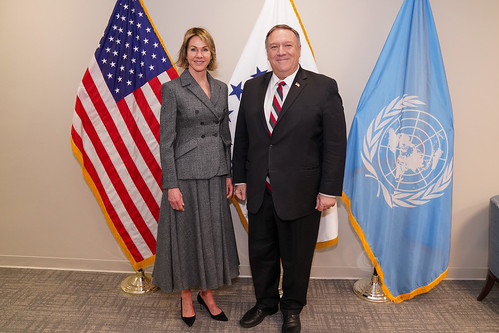 It seems beyond any doubt the duplicity of the US has no bounds.

Remember it was Trump who withdrew the US from the 2015 nuclear deal with Iran in 2018 calling it, "the worst deal ever".

The latest has the US wanting to initiate "snapback" sanctions on Iran-that was part of the deal-which allows a party to the accord to initiate a re-installment of all UN sanctions against Iran.

At issue the 13 year arms embargo on Iran part of the 2015 deal which is due to expire in October-and the US wanted extended. It proposed such an extension to the UN Security Council on Friday. However, the Council rejected the US proposal.

Though the US is no longer part of the deal after the Council vote the US Ambassador to the UN Kelly Craft said, "In the coming days, the United States will follow through on that promise to stop at nothing to extend the arms embargo", adding the US "has every right to impose the so called 'snapback mechanism' in the 2015 deal if a party to the agreement deems Iran in violation to the agreement".

Got that. The US is no longer part of the agreement yet according to Craft "has every right to impose the "snapback mechanism" on Iran".

How's that for US arrogance? It's no longer part of the deal with Iran but no problem we'll use our own rules. Not exactly something new under the sun. It's rather typical whenever the US doesn't get its way. Just ask the indigenous peoples in the American continent where every treaty the US government made with them was broken by the government.

The fact is the only reason the rest of the world deals with the US is because it's too big to be ignored. Yet experience with the US shows it shouldn't be trusted. Which the latest episode of its reply to the UN Security Council vote clearly reveals.

Meanwhile Iran has stated the US implementing "snapback" sanctions of Iran would be "illegal" with its UN Ambassador stating, "imposition of any sanctions or restrictions...will be met severely by Iran and our options are not limited".

Adding to US belligerence also on Friday in a separate incident the Department of Justice confirmed the US seized four Iranian ships on the high seas carrying over a million gallons of fuel headed for Venezuela.

Retired. The author of "DECEIT AND EXCESS IN AMERICA, HOW THE MONEYED INTERESTS HAVE STOLEN AMERICA AND HOW WE CAN GET IT BACK", Authorhouse, 2009
Related Topic(s): Agreement; Government; Iran; Sanctions; Trump; Truth, Add Tags
Add to My Group(s)
Go To Commenting
The views expressed herein are the sole responsibility of the author and do not necessarily reflect those of this website or its editors.