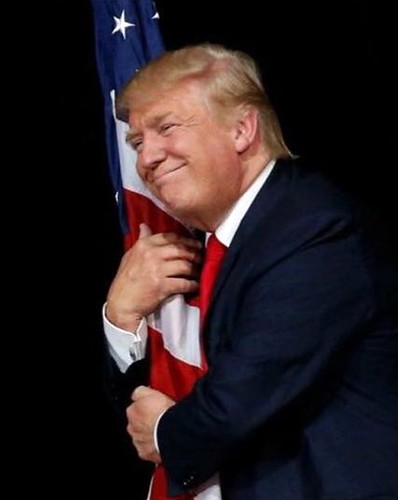 MAGA
(Image by mccauleys-corner)   Details   DMCA
Donald Trump continues to have the support of 40-45% of voting-age Americans and a captive GOP majority in Congress. This is deeply disturbing for many of us because our rejection of Trump is more than just disagreement over policy and ideology. Trump is morally and psychologically unfit to be President and we can't understand how over 100 million Americans don't see this. In the midst of our daily interactions with fellow citizens, we wonder what's happened to the basic values we thought united us.

Trump is a vile man--a liar, narcissist, immature, hyper-aggressive, sexist and racist. He is someone no self-respecting person should want as a friend and no sane employer or business associate would trust. Yet nearly 63 million voters chose him as their head of state. Their irrational choice is a symptom of an underlying pathology in our political life.

Trump's lying is brazen, compulsive and incessant. According to the Washington Post, his tally as of June 1 was "3,251 false or misleading claims in 497 days." But "liar" doesn't capture what he's doing with his lies. The ordinary sort of lying is an ad hoc effort to avoid the truth or to get someone to do what they wouldn't do if they knew the truth.

Trump does plenty of that, but it's part of a broader, more grandiose effort described by Greg Sargent: "Trump plainly views the act of lying, or making things up, or contradicting himself with relentless abandon, as an assertion of power -- that is, the power to render reality irrelevant . . ." Or, as Jacob T. Levy puts it, he is shaping an alternative world for his followers by "undermin[ing] the existence of shared belief in truth and facts."

What is this tribe that crowds his rallies, longing for a vanished American greatness, this army of red hats calling on Trump to "Make America Great Again"? What vision of greatness attracts an incorrigible liar as its prophet? A false vision, a fantasy that his people badly want to substitute for a reality that oppresses them.

Back when America was "great," there were good jobs for people with a high school education, jobs that enabled men to be providers for their women and children. White men were in charge. They were brought up to be self-reliant and to expect that hard work and discipline would be rewarded with prosperity. Homosexuals were closeted, women and people of color knew and accepted their place in a natural hierarchy extending all the way up to God the Father. His Son was seen as 'one of us,' with his Jewish ethnicity and likely skin color ignored.

By 2016 a catastrophe had overtaken this golden era, something that humiliated and disoriented Trump's "real Americans." The movements for racial and sexual equality, the increasing racial diversity of the American population, growing social acceptance of same-sex marriage and declining numbers of white protestants (including evangelicals) made Trump's people feel like strangers in a strange land. They had just lived through the 8-year trauma of a black President and were facing the prospect of a female successor.

There had been a lot of economic pain. Middle-class wages had been stagnant since 1979 causing male participation in the labor force to decline. During this same period, women's participation increased dramatically, partly making up for the shrinking contribution of husbands to middle-class family income. Upward economic mobility--a major ingredient of the American Dream--had been declining for decades, and the decline was steepest in the Southeast, a bastion of Trump support.

Much of the working class, what Marx called the proletariat, had become the precariat. Their lives were precarious--living from paycheck to paycheck or falling into debt. They worked irregular hours without benefits or paid holidays. The rate for "deaths of despair"--from drugs, alcohol and suicide--among non-Hispanic midlife whites (especially men) had risen dramatically since 2000 (in sharp contrast to Canada, Australia and Europe).

Trump's response to this deep malaise and anxiety was an especially toxic version of the traditional populist meme of anti-elitism. He won the Presidency by heaping scorn on the Clinton-Obama corporate Democrats and GOP establishment, and on the "experts" in government agencies and academic institutions that had spawned decades of failed policies. "They" had their chance and blew it.

Now it was time for something completely different--a post-expertise era in which knowledge and experience were no longer required for high office, from the presidency on down. It must have been a heady experience for Trump--a compulsive liar who felt free to say and believe whatever he wanted without any of the evidence the elite invoke. As the press began to notice and report what he was doing, he labelled them as part of the elite, "fake news" and enemies of the people. By blaming the elite for his tribe's insecurity and humiliation, he got his tribe to hate them and love him.

His racist rhetoric, hostility to immigrants of color, sympathy for white supremacists, history of sexual predation and lack of respect for women all made him a credible advocate for the revival of a white nationalist patriarchy. Never mind that such a revival is as likely as a surge in demand for coal miners.

How could white evangelical Christians support such a man, voting 80 to 16% for Trump over Clinton? Because they believe that America should be a Christian nation and the government should uphold Christian values such as the sanctity of fetal life. And Trump agrees, as he told students at Liberty University: "We're going to protect Christianity, and I can say that. I don't have to be politically correct."

Related Topic(s): Christianity; Congress; Evangelical; Government; Immigrants; Patriarchy; People; People; Presidency; Reality; (more...) Trumpism; Truth; Truth; Women, Add Tags  (less...)
Add to My Group(s)
Go To Commenting
The views expressed herein are the sole responsibility of the author and do not necessarily reflect those of this website or its editors.