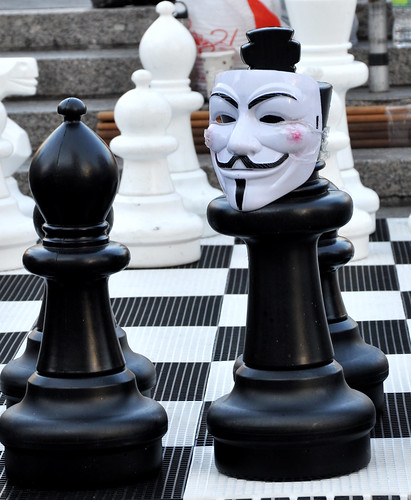 The Not So Grand Game
(Image by Michael Fleshman)   Details   DMCA

There's something foreboding and eerie about this anti-Chinese frenzy that's broken out within the U.S. and its vassal countries. It's like when Germany reacted to its loss of World War I and the Great Depression by blaming Jews and ramping up militarism; an imperialist country, faced with its decline on the world stage and the collapse of its economy, is shifting its reactionary fury onto a manufactured threat.

It's unsurprising that the government and the media are carrying out this campaign. The imperialists have always justified their war efforts by inventing external threats. What strikes me the most is the eagerness with which Americans, Brits, Australians, and the people within the other core imperialist countries have embraced the atmosphere of fear and hatred. This impulse to believe the lies about China, and in many cases to directly target Asians, comes from a deep-seated paranoia. This is the paranoia of the colonizer, of the settler, of the benefactor of the global imperialist order. The fear that is coming out among these types right now, and which has long pervaded their subconscious, is that the people they've stood above will take away their place in the hierarchy.

This is apparent in the central claim of the anti-China propaganda campaign, which is that China will take America's position as the global hegemon and rise to oppress the world. Even though Chinese officials have stated that their goal is not to dominate the world, and China's unaggressive and non-exploitative foreign policy has demonstrated this, visions of a "China threat" and a coming global Chinese tyranny are widespread in American discourse.

Aside from the surface-level propaganda that paints China as an oppressive force (such as the claims that it's interning "millions" of Uyghurs or that it has an "Orwellian" social-credit system), the perception that China represents a threat to freedom is ingrained through the innate American fears of communist "tyranny". As Michael Parenti wrote in his 1970 book The Anti-Communist Impulse, "Our fear that Communism might someday take over most of the world blinds us to the fact that anti-communism already has." And now that China is moving to overtake the U.S. while Marxist ideas spread throughout the capitalist world, the fear has escalated again. "Great power competition", as the U.S. military describes America's current conflict with China and its allies, is the primary focus of Washington's propaganda machine, and a resurgent attempt to demonize communism has come along with it.

This campaign is being led by a network of far-right propagandists, imperialist pundits, and White House-messaging coordinators. The most prominent purveyors of the "China virus" narrative, aside from Fox News and the president himself, have been the creators of the newspaper the Epoch Times. Their headlines and YouTube ads about Chinese bioweapons, communist COVID-19 cover-up plots, and Chinese organ harvesting have been facilitated by the Epoch Times' partnered religious group Falun Gong. Since Falun Gong's members believe that God sent Donald Trump to destroy the Communist Party of China, and that all communists will soon go to Hell when the end times come, whatever version of the truth they put out will conform to the framework they've constructed.

The masses of Americans participating in the hysteria around China may not exactly share Falun Gong's beliefs, but their fear--both of China and of communism--comes from the belief that God is on their side. The Bible itself strongly encourages them to share Falun Gong's punitive attitude towards perceived enemies and sinners. "Disobedience to God's commands carries unforgiving consequences," Parenti writes in his book God and His Demons. "God delivers plague and death upon the Israelites themselves when they stray. The 'wicked'--a term used tirelessly in the Bible--are those who violate the Judaic law by engaging in activities on the Sabbath, by eating pork or shellfish, by wearing garments of mixed weave (linen and wool together), or by not lighting the right candles at the right time. But when people heed God's commandments and observe his ritual laws, he assures them: 'I will put none of these diseases upon thee, which I have brought among the Egyptians.'"

The power of this rhetoric about plague and disease being punishments for the "wicked" is especially apparent now. Trump's efforts to stir up a COVID-19 culture war have the goal of convincing his evangelical base--the "righteous"--that they'll be saved from the pandemic, as opposed to the "sinners". Trump tells his supporters that they're right to protest for the lifting of COVID-19 movement restrictions, because those who support these measures are all liberals and communists who want to take away the freedoms of patriots like them. The implicit message is that they'll be safe from the virus due to their faith in Trump, Christianity, and America.

At least this is what the most hardline ideologues in Falun Gong believe. The genocidal message of the Biblical end-times prophecy, wherein only the righteous ascend to Heaven during the apocalypse, is becoming more present in the American consciousness as America declines. Since the United States has always been a force for good that's supported by God, the current failures in the American experiment--the collapse of U.S. global hegemony, the sharp drop in U.S. living standards amid this year's economic crash, the unsurpassed explosion of U.S. coronavirus cases--must be the fault of demonic forces. All who stand against the United States, or who stand against the societal hierarchy that capitalism and colonialism created, are implicated in a plot to destroy the good in the world.

"America represents more than just an economic system," Parenti writes in his book Dirty Truths. "It is an entire cultural and social order, a plutocracy, a system of rule that is mostly by and for the rich. Most universities and colleges, publishing houses, mass circulation magazines, newspapers, television and radio stations, professional sports teams, foundations, churches, private museums, charity organizations, and hospitals are organized as corporations, ruled by boards of trustees (or directors or regents) composed overwhelmingly of affluent business people. These boards exercise final judgement over all institutional matters." It's no coincidence that the divine order that the believers in Americanism task themselves with defending is the order that enforces this aristocracy.

Communists aim to end the imperial core's internal plutocracy, and China aims to unseat U.S. imperial dominance while reversing the process of global colonialism. So these forces must be countered with a fanatical dedication.

The United States and its loyalists will continue with their holy crusade, but reality will continue to encroach upon the constructed narrative. However much the neoconservative intelligentsia predicts that China will fall, China will keep gaining allies while improving militarily, economically, and technologically. However much the Washington imperialists declare that Venezuela's Chavista government will soon be ousted, the Venezuela regime-change plots will in all likelihood keep failing. However much the White House claims the economy will soon improve, the slow-motion collapse of neoliberalism will keep making the economy scream.

"Sometimes the orthodox view becomes so entrenched that evidence becomes irrelevant," Parenti writes in his book The Culture Struggle, "but there are also times when the officialdom and the corporate media have difficulty finessing reality. In 2003 official propaganda promised us a quick and easy 'liberation' of Iraq, but reality brought undeniably different results that challenged the official line. White House propaganda told us that U.S. troops were 'gratefully received by the Iraqi people,' but the course of events produced a costly and protracted war of resistance. Propaganda told us a 'fanatical handful of terrorists and Baathist holdouts' were causing most of the trouble, but how could a handful pin down two Marine divisions and the 82nd Airborne, and inflict thousands of casualties?"

The "China created COVID-19" narrative is the 2020 version of the "Iraq has WMDs" narrative, and it's come with parallel claims about U.S. victory being assured; Trump wants us to believe that America will win his escalating economic war with China, and we're meant to think that the U.S. military operations in the Southeast will prevail over China. Yet Trump's plans to default on U.S. debt to China, and to cut off Chinese exports to the U.S., will inevitably hit American consumers, drive up inflation, and further weaken the global position of the dollar. And China, which has already arguably edged out U.S. military power in the Indo-Pacific, would undoubtedly win against the U.S. if it were to partner with Russia in a world war. The miscalculations of the imperial strategy during the Iraq invasion are now happening on a scale of global economics and great-power competition.

Related Topic(s): Capitalism; God; Media; Military; Paranoia; Plague, Add Tags
Add to My Group(s)
Go To Commenting
The views expressed herein are the sole responsibility of the author and do not necessarily reflect those of this website or its editors.