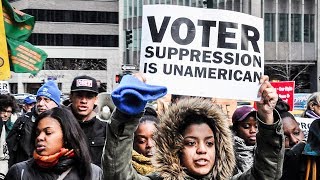 Republicans are ramping up their efforts to suppress the vote by having cities and states shut down polling stations.
(Image by YouTube, Channel: The Ring of Fire)   Details   DMCA

Wisconsin has become early 2020's Exhibit A for political fights surrounding the updating of statewide voter lists, where escalating court battles over conflicting law, procedures and underlying data could lead to removing thousands of legal but infrequent voters.

The fray's epicenter is a series of rulings by a county judge against Wisconsin's bipartisan but deadlocked state election board, which has refused to immediately delete 209,000 voter registrations in a swing state with 3.3 million voters. The conflict may preview legal battles coming to other states. California, Pennsylvania, North Carolina, Colorado and Virginia have all received letters from Judicial Watch, a right-wing group, threatening to file suits like the complaint from the Wisconsin Institute for Law and Liberty (WILL) against the Wisconsin Elections Commission (WEC).

WILL's lawsuit, where two of its three plaintiffs are donors to state Republican campaigns, seeks the immediate removal of 209,000 infrequent voters who were flagged for the WEC by an interstate data consortium run by top election officials. In March 2019, the WEC's staff recommended taking 12 to 24 months to vet those voters because in 2018 after using the consortium's analytics, 24,270 inactive but registered voters -- or 7 percent of those flagged and delisted -- showed up to vote, as a memo from the WEC explained. (Those voters could re-register under a same-day registration law after showing the correct documentation.)

The affected voters, whose numbers were slightly larger than Donald Trump's 22,748-vote margin over Hillary Clinton in Wisconsin in 2016, were mostly traced to quirks in the state's driver's license database where addresses were extracted and used to verify a voter's status. The bipartisan WEC initially decided to postpone removing the 209,000 voters, but has since split on party lines. (An appeals court has stayed the lower court's purge order, and the state chapter of the League of Women Voters has filed a federal lawsuit to stop it.)

But Wisconsin is not the only state wrestling with voter analytics. In Georgia, the process used last fall to remove 300,000-plus old registrations (out of 7.4 million statewide) led to 22,000 voters being reinstated in December. The reversal came after Secretary of State Brad Raffensperger moved up the date for Georgia's data query by six months, restoring the inactive voters' status. In Iowa, election officials pressed pause after finding a 100,000-person database that may have incorrectly listed former felons, who cannot vote until they reapply and regain that right.

Thus, in early 2020, there is an emerging trend of the potential disqualification of thousands of infrequent voters in swing states. While partisan claims surrounding these developments often dominate their news coverage, this trend is driven by a confluence of conflicting laws, regulatory precedents and imperfect voter data.

"The voter registration process and the list maintenance process have become incredibly polarizing," said Matthew Weil, the Elections Project director at Washington's Bipartisan Policy Center. "Any removal from the [statewide voter] list is now considered by some to be a purge. And any perceived dead-weight is considered ripe for fraud. Neither one of those views is right. There should be reasons to remove people. And there are reasons why we don't want to remove people too quickly also."

"Part of the problem here is we are using antiquated, outmoded systems," said Barbara Arnwine, who from 1989 to 2015 ran the nation's largest Election Day legal hotline and has since founded the Transformative Justice Coalition. "And it [mass removals] is not required under the NVRA [the National Voter Registration Act of 1993]. But even for those states that chose to do it, they are purposely engaging in a process that is fundamentally outdated and ineffective -- and has the predictable consequence of removing valid voters from registration lists."

Weil and Arnwine both said that the NVRA, which was crafted for an era when people used paper registration forms and postcard mail to contact voters, needed updating. But such modernization was not part of House-passed H.R. 1, an election reform package now stuck in the Senate. Thus, today's partisan litigants who see advantages in using old and sometimes conflicting state and federal laws, their accompanying bureaucratic procedures and imperfect government data, will likely continue to unfold in 2020 to help their political allies.

Self-appointed voting list vigilantes are not new. But Wisconsin, which had 2016's second-closest presidential election margin and has seen some of the past decade's most bitter fights over voting rules, has not seen a voting list fight for many years. Nor does the state have a history of voter fraud. Instead, its election administration has been seen as a model led by a bipartisan panel that valued civic participation.

Part of that legacy led the state to join an interstate consortium -- the Electronic Registration Information Center (ERIC) that draws on several state and federal government databases to help officials update their statewide voter rolls, and to identify and then contact eligible but unregistered voters. (Disclosure: Voting Booth's reporter was part of the Pew Center on the States team that designed ERIC.) More than half the states now use ERIC.

Soon after Wisconsin joined ERIC, its state election board found a unique but deepening problem. Unlike all but one other state in the consortium, Wisconsin's Division of Motor Vehicles never offered a voter registration option to residents getting a driver's license. That is because when the NVRA -- or so-called Motor Voter law -- was passed in 1993 (and primarily required the drivers' agencies to offer registration), it exempted states with Election Day registration. Wisconsin was a same-day state. Its reward for good behavior had come back to haunt it.

Steven Rosenfeld  covers democracy issues for AlterNet. He is a longtime print and broadcast journalist and has reported for National Public Radio, Monitor Radio, Marketplace,  TomPaine.com  and many newspapers. (more...)
Related Topic(s): Election; Political Parties; Purging; Vote Suppression; Voter Id; Voter Registration; Voter Rolls Purged; Voting; Wisconsin Judge Paul Malloy, Add Tags
Add to My Group(s)
Go To Commenting
The views expressed herein are the sole responsibility of the author and do not necessarily reflect those of this website or its editors.