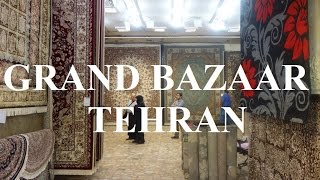 The art of the deal, when practiced for 2,500 years, does lead to the palace of wisdom. I had hardly set foot in Tehran when a diplomat broke the news: "Trump? We're not worried. He's a bazaari (merchant trader)" -- implying a political compromise will eventually be reached.

The Iranian government's response to the Trump administration boils down to a Sun Tzu variant; silence -- especially after the Fall of Flynn, who had "put Iran on notice" after a ballistic missile test that did not infringe the provisions of the Iranian nuclear deal, and the idea of an anti-Iran, Saudi Arabia-UAE-Egypt-Jordan mini-NATO. The Iranian naval drills -- from the Strait of Hormuz to the Indian Ocean -- had been planned way in advance.

I was in Tehran as part of a small group of foreign analysts, guests of the Majlis (Parliament) for the 6th International Conference in Support of the Palestinian Intifada. No one in Trump's circle would be caught dead in such a gathering -- featuring parliamentary delegates from more than 50 nations, a de facto mini-UN. Yet what they missed at the impressive opening in a crowded, round conference hall was the center of power in Iran on display; Supreme Leader Ayatollah Khamenei, President Hassan Rouhani and Majlis Speaker Ali Larijani.

Khamenei admitted "the existing crises in every part of the region and the Islamic ummah deserve attention," while reinforcing the key issue is Palestine. Hence the conference could become "a model for all Muslims and regional nations to gradually harness their differences by relying on their common points." The Wahhabi House of Saud, incidentally, was nowhere to be seen.

Khamenei's was a necessary call for Muslim unity. Few in the West know that during the 1940s and '50s, as decolonization proceeded apace, Islam was not trespassed by vicious Sunni-Shi'ite hatred -- it was later fomented by the Wahhabi/Salafi-jihadi axis.

Hefty discussions with Iranian analysts and diplomats revolved on the efficacy of multilateral talking compared to advancing facts on the ground -- ranging from the building of new settlements in the West Bank to the now all but dead and buried Oslo two-state myth.

On Palestine, Lebanon's Parliament Speaker Nabi Berri offered a gloomy assessment of the three solutions now available; suicide; giving in; or running away from what's left of Palestinian land. Later on down the hall I asked the deputy secretary-general of Hezbollah, the affable Naim Qassem, about the Trump administration's hint of a one-state solution. His answer, in French: "One state means war. Two states means peace under their conditions, which will conduct us to war."

The road to post-Enlightenment

As with most conferences, what matters are the bilaterals. Leonid Savin re-confirmed Russian airspace is now all but sealed with multiple deployments of the S-500 missile defense system against anything the US may unleash. Albanian historian Olsi Jazexhi deconstructed the new Balkans powder keg. Muhammad Gul, son of the late, larger-than-life General Hamid Gul, detailed the finer points of Pakistan's foreign policy and the drive to build the China-Pakistan Economic Corridor (CPEC).

Blake Archer Williams, otherwise known as Arash Darya-Bandari, whose pseudonym celebrates the "tyger tyger burning bright" English master, gave me a copy of Creedal Foundations of Waliyic Islam (Lion of Najaf Publishers) -- a sophisticated analysis of how Shi'ite theology led to the theory of velayat-e faqih (the ruling of the jurisprudent) at the heart of the Islamic Republic of Iran. I'm considering sending the book to voracious reader Steve Bannon.

Pyongyang was also in the house. The North Korean delegate had produced an astonishing speech, essentially arguing that Palestine should follow their example, complete with a "credible nuclear deterrent." Later on in the corridors I saluted the delegation, and they saluted back. No chance of a bilateral though to expand on the unclear points surrounding Kim Jong-nam's assassination.

Every time I'm back in Tehran I'm impressed with the open avenues for serious intellectual discussion. Once again Tehran proved to be unrivaled all across Asia as a theater to debate all crosscurrents involving post or counter-Enlightenment, or both.

I was constantly reminded of Jalal Al-e Ahmad, the son of a mullah born in poor south Tehran who later translated Sartre and Camus and wrote the seminal Westoxification (1962).

He spent the summer of 1965 at a seminar in Harvard organized by Henry Kissinger and "supported" by the CIA, and pivoted to Shi'ism only by the end of his life. But it was his analysis that paved the way for sociologist Ali Shariati to cross-pollinate anti-colonialism with the Shi'ite concept of resistance against injustice into a revolutionary ideology capable of politicizing the Iranian middle classes, leading to the Islamic Revolution.

That was the background for very serious discussions on how Iran (resistance against injustice), China (remixed Confucianism) and Russia (Eurasianism) are offering post-enlightenment alternatives that transcend Western liberal democracy -- a concept rendered meaningless by neoliberalism's hegemony.

Related Topic(s): Conference; Iran; Islam; Palestinian; Resistance; Shiite, Add Tags
Add to My Group(s)
Go To Commenting
The views expressed herein are the sole responsibility of the author and do not necessarily reflect those of this website or its editors.