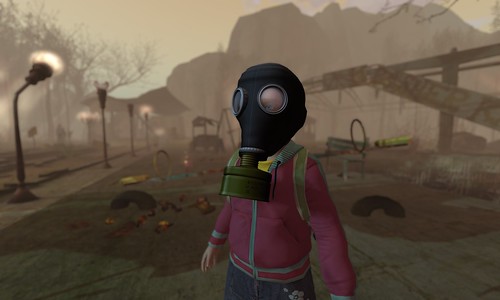 .mummy, is it safe to come out and play?.
(Image by ' ' ' TORLEY ' ' ')   Details   DMCA
>The news media obsession with the daily chaos in the Office of the President is distracting the public from many dangerous policies the Trump administration is quietly implementing. Among the worst of these is the doctrine in its recently published National Defense Strategy (NDS, Jan. 19) and Nuclear Posture Review (NPR, Feb. 6).

This new doctrine makes three disturbing claims: (1) the U.S. needs to rely more on "low-yield" nuclear weapons, (2) we should be prepared to use nuclear weapons even in the case of non-nuclear aggression, and (3) great-power competition, "not terrorism, is now the primary concern in U.S. national security."

The first two claims are related as means to end. The idea is that it would be disproportionate to respond to an attack by conventional forces or to a serious cyber-attack by unleashing the massive destructive power of our strategic nuclear weapons. Against Russia this would bring about mutual destruction of both countries and planet-wide devastation. But this catastrophic prospect takes away much of the deterrent power of our nuclear arsenal because we wouldn't use it if Russia attacked in Europe with conventional weapons, and Russia knows this. Therefore, we need to have a credible lower-level nuclear deterrent that would not lead to mutual destruction--so-called "low-yield" or tactical nukes that we would be willing to use against a non-nuclear attack.

To appreciate the insane Strangelove quality of this argument, we should note that many "low-yield" warheads have the same explosive capacity as the ones dropped on Hiroshima and Nagasaki (killing 200,000 and 70,000 respectively). Could we count on Russia rejecting as disproportionate a strategic nuclear response to our tactical nuclear attack? Keith Payne, a principal author of Trump's NPR, wrote a paper in 1980 claiming that the U.S. could 'win' a nuclear war with the Soviet Union while holding casualties to 20 million, "a level compatible with national survival and recovery." So stop worrying, and learn to love our bombs!

The third claim (embracing great-power competition) worsens the deteriorating relationship between us and Russia created by clashes in Eastern Europe and Syria, and by the political circus known as Russiagate. According to the NDS, the years 2001 to 2017, during which we spent as much as $6 trillion on the War on Terror, have been "a period of strategic atrophy" in which our competitive advantage in nuclear weapons "has been eroding." So we must resume a "long-term" nuclear arms race with Russia.

Russia is no longer communist, and the Soviet Union ceased to exist in 1991. Yet NATO, a U.S.-led military alliance formed after WWII to contain the Russian-dominated USSR and Warsaw Pact, has since 1991 expanded to the borders of Russia in the Baltics and openly discussed including Ukraine in the alliance. Ukraine has a common border and centuries-old religious, cultural and economic ties with Russia. To understand the Russian perspective on this NATO expansion, imagine how the U.S. in the 1980s would have reacted to Mexico joining the Warsaw Pact.

In February of 2014 the U.S. collaborated with pro-Western nationalist factions in the Ukrainian parliament to overthrow the democratically elected President Viktor Yanukovich (who favored closer ties with Russia). In response, Russian President Putin began supporting a separatist rebellion in eastern Ukraine and resumed Russian control over Crimea. This peninsula had been part of Russia until Khrushchev assigned it in 1954 to the then Soviet republic of Ukraine; it includes Sevastopol, the base of the Russian Black Sea Fleet.

The U.S. and NATO say these Russian actions threaten eastern members of NATO such as Poland and the Baltic States. NATO and Russia have been engaging in military maneuvers in close proximity along the eastern border of NATO, with American forces on display in Poland, Romania, Bulgaria and Hungary (all former members of the Warsaw Pact).

At the same time, the U.S. has announced that the troops it originally sent into Syria to help defeat ISIS will continue to operate there even though ISIS territory has been reconquered. Their new objective is to prevent Syrian President Assad from regaining control of territory still held by other rebel forces, and to promote regime change. This puts the U.S. in conflict with Russia, a close ally of Syria for decades. Russian and American military operations in Syria are occurring in dangerous proximity to each other. Mistakes or provocations by either side or by other players such as the Israelis, Kurds, Hezbollah or Turkey, could easily ignite a larger conflict.

The fearmongering rhetoric of Russiagate is exacerbating an already tense U.S.-Russia relationship. The Democrats, MSNBC and many left-wing commentators have seized on the recent indictments of 13 Russians by Robert Mueller as proof that Putin "undermined our democracy," that--as Rachel Maddow breathlessly put it--"the [Trump] presidency is effectively a Russian op." Yet, as Deputy Attorney General Rosenstein says, "there is no allegation in the indictment of any effect on the outcome of the election."

There is a strong dose of hypocrisy in the moral outrage over Russiagate. The U.S. has regularly intervened in the elections of other countries such as Venezuela, Honduras, Ukraine and Russia. As James Risen wrote in The Intercept (Feb. 16), for Putin to use his security services to influence American politics is "well within the acceptable norms of great power behavior. After all, it is the kind of covert intelligence program the United States has conducted regularly against other nations -- including Russia."

Democrats are trying to inflame hostility toward Russia and Putin and fuse it with growing popular revulsion against Trump. They're creating a dangerous national mood that makes Americans more receptive to a call for a new nuclear arms race and a lower threshold for using nuclear weapons. Democrats are pushing a new Cold War led by a mentally unfit commander-in-chief, a war that Russian expert Stephen Cohen describes as "much more dangerous, much more likely to end in Hot War, than was the 40-year Cold War, which we barely survived."